During the 2018 Home Builders Blitz, More than 250 homes were built, renovated and repaired in communities across the country. Industry builders and suppliers volunteered with Habitat in more than 70 communities in 31 states.

Since 2002, more than 2,200 builders have participated in Home Builders Blitz.

Habitat is grateful to the sponsors of the 2018 Home Builders Blitz.

During the 2016 Home Builders Blitz, professional builders partnered with 69 affiliates in 31 states to help build, repair or rehab 242 homes.

In 2014, 250 new homes were constructed, and existing homes were also rehabbed or substantially repaired.

2012’s Home Builders Blitz brought 193 additional homes with the help and partnerships from 74 affiliates and their builders.

During this event, in spite of a downturn in the building industry, 110 affiliates partnered with builders to complete 263 homes in 34 states.

As a result of the first three Home Builders Blitzes, professional homebuilders and Habitat affiliates partnered together to construct and renovate a total of 734 homes.

More than 1,000 professional homebuilders teamed with 130 Habitat affiliates across the United States, working on 459 homes to provide housing for nearly 2,000 people.

This was the largest single U.S. homebuilding effort in Habitat for Humanity’s history.

They recruited 12 additional professional homebuilders to build one house each in a five-day period, donating as much of the materials as possible.

The results were astounding: Twelve homes were completed in five days at a total cost to Habitat (not including land) of $84,000.

In addition to the donated labor and materials, the builders raised $100,000 in cash donations. 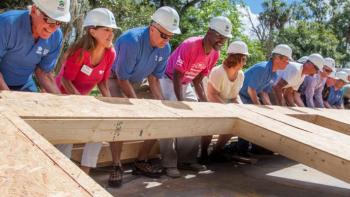 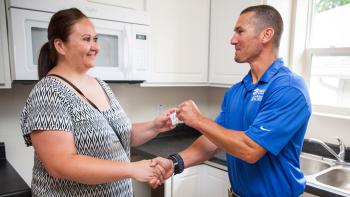 The Home Builders Blitz puts the capabilities of Habitat in overdrive, allowing us to exponentially increase our work and maximize our efforts with the help of the professional homebuilding community.