International Women Build Day is a global event focused on building and improving homes and raising awareness of affordable housing issues facing women and their families. Habitat, Lowe’s and hundreds of women volunteers will come together for the build day, which takes place on International Women’s Day, March 8.

Why is it important?

In the U.S., nearly 19 million households spend half or more of their income on a place to live. That means 1 in 6 families have to make the difficult decision between securing housing and paying for food, health care, childcare, education and reliable transportation.

Habitat and Lowe’s believe every child, person and family deserves a safe and stable home, and on International Women’s Day, we are calling on women across the globe to raise a hammer and share our message to spotlight this important issue. Through this partnership, Habitat and Lowe’s seek to empower women and provide them with opportunities to use their construction skills. Together, we will create safe, stable homes globally.

Lowe’s partnership with Habitat began in 2003 and since then, the company has committed more than $63 million and helped more than 6,500 Habitat partner families improve their living conditions. Lowe’s has supported Habitat’s Women Build program since 2008 and since then, more than 10,000 Lowe’s Heroes volunteered in communities across the U.S.

Women Build volunteers from all walks of life have come together to build since 1991. 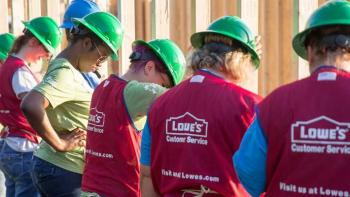 Lowe’s relationship with Habitat for Humanity International and Women Build has helped to build hundreds of homes in more than 300 communities across the United States.