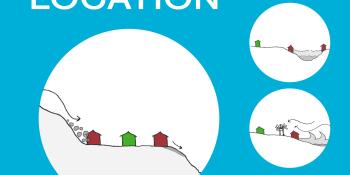 The three major hurricanes of 2017, Harvey, Irma and Maria, caused devastation and economic losses much higher than previous cyclonic seasons, that the World Bank has estimated at US$0.5-1 billion/year, negatively impacting the inhabitants of several Caribbean islands.

Housing is a very vulnerable resource to these climatological disasters that, in addition, have been increasing due to climate change. Unfortunately, it is the people who live in the places with the greatest poverty, who are often harmed the most. The cost of repairing or even rebuilding the houses affected by a disaster is very high. In fact, it is “housing” that has been identified as one of the greatest costs faced by governments and humanitarian agencies to support communities to recover after a disaster.

Even though, in our countries there are building codes and even empirical knowledge on how to improve the constructive quality of housing, Habitat for Humanity International (HFHI) has met with the challenge that this technical knowledge has not been properly transmitted to vulnerable communities. There are several reasons: the technical information available is not integrated into the curricula of the professions related to construction, it is difficult for unqualified personnel to understand or has not even been adequately disseminated.

Habitat believes that each person deserves a decent and safe place to live and it is strongly committed to getting families to achieve the strength, stability and self-reliance they need to build a better life for themselves. That is why, it recognizes the need to transmit knowledge about resistant construction to families that live in vulnerable communities.

Even though this information is not easy to transmit, because it is very technical; in 2015, Habitat began a project on disaster risk reduction in Jamaica, based on the safe housing. On this occasion, to teach people of the community, an adequate housing training was developed, with several materials; a few texts and many diagrams and drawings. The guide was based on existing information in the country and in the region, although updated with obtained experiences from other regions of the world, also prone to cyclones or typhoons.

Currently, the organization recognizes that the first step in transmitting information to communities is properly training local builders. For this, Habitat has developed a specific program based on the guide. In this program, the assistants learn, through an easy approach, the new concepts, since it is based on the theory, pyramid of learning, which concludes that the best way to learn, is putting into practice what has been learned.

In all the training and awareness sessions, Habitat promotes the participation of men and women by establishing minimum quotas of participation and determining avenues to support the care of children during the sessions.

How to teach to resilient building?

The organization implements the Participatory Approach for Safe Shelter Awareness (PASSA) methodology, based on the community’s own capacity to identify and solve their problems, considering their own experiences and prior knowledge.

However, it is testing new teaching methods such as:

This knowledge dissemination strategy is based on experiences from other countries and different organizations. It has continuous monitoring of Habitat in the region, so it is constantly evolving. This effort aims to reduce the impacts of disasters in the Caribbean in an efficient way, especially in the housing component. It is the intention of Habitat to offer its experience and knowledge in the Caribbean to the governments of the region, humanitarian organizations, academia and civil society, so that together, we can reduce the vulnerability of the region and with it, the important economic losses produced by disasters.

The guide, initially created in Jamaica, was shared with other Caribbean countries where Habitat has a presence, and it was confirmed that the recommendations given in it, were relevant in other countries of the region. Currently, there are versions of the guide in English for Jamaica and the Commonwealth of Dominica, and in Spanish for the Dominican Republic and Puerto Rico.