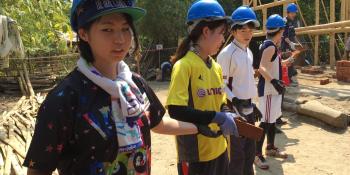 In its eighth year, the Habitat Young Leaders Build campaign continues to transform lives and communities through thousands of youth supporters.

Japanese student Rino Yoshida, 19, felt awkward when she saw the living conditions of the family with whom she was building a new home. “Their temporary house was fragile and vulnerable. Once the house is finished and the family has moved in, my wish is that they will have a better life.” She was among more than 50 Japanese youth who worked alongside four Myanmar families during the Asia Build in February 2019. It was the second year that the special build, a key initiative under the Habitat Young Leaders Build, was held in Myanmar’s Bago region.

Perspiring in the relentless heat, she continued to pass bricks down the human chain. Bricks were part of the materials used to build disaster-resilient homes made largely of bamboo. Rino already had her first taste of a construction build when she was in Battambang, Cambodia, during her Global Village trip. She was keen to sign up after learning about the #HabitatYLB Asia Build from a school friend.

Since the youth-focused Habitat Young Leaders Build began in 2012, thousands of Japanese volunteers have worked on homes with families in need of decent, affordable housing. In 2018 alone, a total of more than 1,600 Global Village volunteers were mobilized by Habitat Japan. Domestically, the vibrant campus chapters often assist older people and other vulnerable groups by sprucing their living environment under Project HomeWorks.

Among those volunteers who have ventured overseas is Akihiro Aihara, a 20-year-old architecture student. He first joined a Habitat build in Ho Chi Minh City, Vietnam, in 2018.  ”I only worked for two days because I caught a cold. This year, when I joined the #HabitatYLB Asia Build, I told my parents not to worry. I got enough sleep and I researched about Myanmar and prepared myself psychologically,” he says. “The family I worked with was very kind. The welcome ceremony was a big surprise because many people from the community greeted us. When new students come to my university, I will encourage them to join Habitat activities.”

In other locations such as Korea, Hong Kong, Vietnam and Thailand, students are a force to be reckoned with. Young people in Korea had taken part in workshops to decorate cookies baked in the shape of a house to express their dream of a better home. They had also raised funds via social networking sites to support local projects as well as the construction of homes in Cambodia or schools in Indonesia.

Like their Japanese counterparts, Hong Kong youth had also taken to the streets to raise funds for Habitat projects across Asia-Pacific. Some of the youth supporters travel from Hong Kong to build in other countries, particularly in China.

Meanwhile, students in Vietnam provide sustained support. “Our schools work with Habitat Vietnam every year to build houses after the fundraising is done,” says Seo Yeon, a 12th grade student from The American School who recently worked on a home with her schoolmates and teachers. “It felt so interesting to actually build a house, not just raise funds or send presents; I feel like I can be part of it, part of the house.”

With four Global Village trips under his belt, Shota Taguchi is almost like a veteran among the youth volunteers. Just before he graduated from university, he had won the flag design competition during the 2015 Habitat Young Leaders Build. He said: “Housing issues due to poverty and disasters are serious, but for most people it may be difficult to take action. I wanted to deliver a message that to take an action is not so difficult. Any good deed for the sake of others can change the world.”