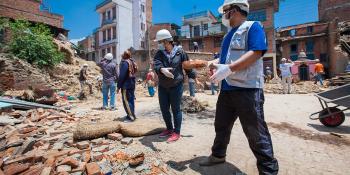 Habitat for Humanity has worldwide experience responding to natural and man-made disasters from hurricanes in the southern USA to the 2004 Indian Ocean tsunami and the earthquakes which hit the Caribbean nation of Haiti and Chile in South America in 2010.

Habitat works with local communities, governments and other organizations, but the focus is always on providing permanent housing solutions for people vulnerable to, or afflicted by natural disasters, conflicts and other calamities.

Rebuilding homes and lives after a disaster may take many years. But Habitat starts from the Day After.

Disaster-affected families who have lost their livelihoods are not in a position to repay mortgage loans. However, they are encouraged to contribute “sweat equity” in rebuilding their homes and communities.

To extend its reach Habitat for Humanity establishes Habitat Resources Centers in key locations often with partner groups. Centers provide expertise in one or more of such areas as project and construction management; appropriate technology including the production of low-cost, high-quality building materials; and providing construction skills training and employment opportunities for local people.

Rebuilding After Disasters in the Asia-Pacific Region
Habitat has responded to many disasters in the Asia-Pacific region. Its largest was an ongoing program to help victims of the 2004 Indian Ocean tsunami. By the time the program was completed in 2010, an estimated 25,000 families in India, Indonesia, Sri Lanka and Thailand should have benefited from Habitat reconstruction programs.

Habitat offices have responded to a range of recent disasters including:

Outside the Asia-Pacific region, Habitat has been involved in rebuilding homes after the 2010 earthquakes in Chile and Haiti, and following Hurricanes Katrina and Rita which hit the southern USA in 2005, as well disasters that hit in Romania and Lebanon and elsewhere.