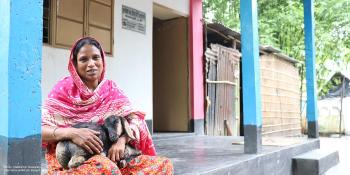 Shirin, 38, remembered the first time her family of four entered their new home in January 2019. “I cleaned the room, brought in our clothes stand and belongings, and offered prayers and thanksgiving to the Almighty for this happy moment.”

Shirin, her husband and her younger children live in Taragai village, Mymensingh district, north of Bangladesh’s capital Dhaka. Her previous house was made of thatch and bamboo and salvaged tin sheets. During the annual monsoon season, rainwater would leak through the roof and walls, making the earth floor muddy.

In a safe and secure home, Shirin is actively creating a better life for her family. While her husband Mostofa, 45, goes to work as a bus conductor, she is busy tending to her fruit garden around her house. In summer, she can harvest jackfruit, mango and pomelos.

At the back of her house, she keeps two goats and a pair of pigeons that will eventually be sold in the local market. A goat can fetch up to 750 taka (U$9) while a pair of pigeons can be sold for up to 300 taka. After moving in, her family income has increased to 8,000 taka a month from 6,000 taka previously. “Even at home, I can do some work and raise my family,” Shirin shares.

“I want my children to get education and have full lives,” she adds. Her sons Mobaraq, 8 and Akbar, 12, are studying in local schools. Her daughters Tashlima, 18, and Tanjila, 21, are already married and live in other villages in Mymensingh with their own families.

Since October 2017, the Ahmad Family Fund and Habitat for Humanity Bangladesh have enabled 13 families including Shirin’s in Mymensingh to build strength, stability and self-reliance through shelter.

Habitat first began working in Bangladesh in 1999 with its first project in Mymensingh. Since then, more than 1,200 families have been supported with decent homes, housing renovations, community toilet and bathhouses, walkways and drainage systems and a series of capacity building and awareness raising training. Find out more at habitatbangladesh.org or connect via facebook.com/HabitatBD

“Even at home, I can do some work and raise my family.” — Shirin