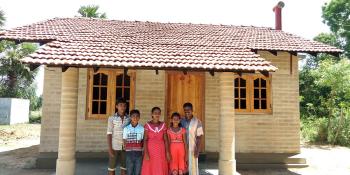 MANILA, June 18, 2018 — For the 25 years that she is married, Ushathevi has never had a permanent house. “My husband and I came from poor families but ours was a love marriage.” They used to live wherever they could find work as daily wage laborers. After being displaced by Sri Lanka’s civil war in 2006, they lived for over a decade in a temporary shelter given by a nongovernmental organization.

In 2017, Ushathevi, 43 and her husband, 47, marked their silver wedding anniversary by moving into a permanent home. Their house in Vilavettuvan village, Batticaloa province, eastern Sri Lanka, was completed on August 22, 2017. They moved in the next day as that was considered an auspicious date.

Ushathevi and Thillainathan were the first to build their home with compressed stabilized earth blocks, an alternative construction material that is promoted under the “Homes not Houses” project. Funded by the European Union, the project is implemented by Habitat for Humanity Sri Lanka and World Vision Sri Lanka.

As of May 31, 2018, 353 homes have been constructed and more than 1,836 homes are currently in different phases of construction in the eastern district of Batticaloa and the northern districts of Kilinochchi and Mullaitivu. The multi-year project includes the construction of conventional brick-and-mortar houses as well as homes that are built with alternative construction materials such as compressed stabilized earth blocks.

Thillainathan had applied to become a Habitat homeowner after he learned of the European Union-funded project. “I heard that Habitat is providing special blocks. My wife and I visited the yard and checked the blocks. After we saw that compressed stabilized earth blocks were stronger than fired bricks or cement sand blocks, we decided to build a house with CSEBs.”

At the block yard in Batticaloa, they saw demonstrations on the blocks’ strength and durability that were conducted by Habitat Sri Lanka and its partner organization World Vision Sri Lanka. Despite being immersed in water, the edges of the blocks remained intact and did not dissolve, said Thillainathan. He also observed that the blocks did not break when thrown on the ground. Later, he did the same strength test with the blocks that were brought to construction site for his house.

During the house construction, Thillainathan helped to mix mortar, sieve sand and move materials such as blocks, timber and tiles. Both he and his wife also cleaned up the build site.

Since moving in, Thillainathan estimated that his family has received up to 1,000 visitors, many of whom are interested in building a home like theirs. “I told them that this is the best house for us. There is no need to expect more,” he said, adding that all the visitors have only good things to say about his house. Pointing out that the temperature is cool inside his home, Thillainathan said: “If they (the visitors) build a house like mine, they will also get the same benefits.”

Meanwhile, Ushathevi could still recall the days of living in a door-less temporary shelter. “Whenever there was heavy rain, I would put pieces of cloth all around to absorb the water that came in; I couldn’t sleep because I had to keep wringing the water out of the cloths.” Whenever the children had to do their homework, the family could not go to sleep because space was limited in the temporary shelter. Now that they have their own room, the children are also going to bed earlier, Thillainathan noted.

In the past, their family had to relieve themselves in the bushes though they were afraid of being seen as well as being bitten by insects. With their own toilet next to the house, they now have more privacy and safety. They also get water that is piped in from their own well.

Ushathevi added: “I used to cook on a sand floor. Now I stand on a cement floor.” Her second son Dinesh, 17, who studies in grade 11, remarked: “It used to be very hot. Now it is very cool.”

While tending vegetables such as okra, eggplant and chilli in her home garden, Ushathevi is already planning for the future. In three to four years’ time, she wishes to paint the interior of the walls. “I will choose one color for the blocks and another color for the grooves. I will consult the painter about this.”

Thillainathan gave the reason for holding off the painting of the walls. “Until the Habitat-EU project is completed, people are still visiting our house. If we paint the walls, they can’t see the blocks. Now people are saying that the blocks look nice without being painted.”