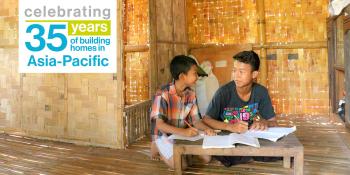 In June 2017, Daw Thuzar’s life took a turn for the better after her family of four moved into the new home that they built with Habitat for Humanity Myanmar.

Feeling secure from the heavy annual rains, she can save the money used for house repairs to invest in a better education for her children. While her eldest son is now attending the school in town, she is saving more money so her youngest son can also join his brother.

Daw Thuzar, 33, makes a living by rolling tobacco cigars, like most women in her village, Ma Kyet Su, on the outskirts of Bago City in central Myanmar. She earns US$2.20 a day from selling the rolled cigars to the local factory. Her work day lasts up to 10 hours, after which she also looks after her family’s needs.

Her husband U Aung Aung Oo, 37, is a carpenter who works as a motorcycle taxi driver when there are no construction jobs available.

Every year, parts of Myanmar are flooded at the peak of the monsoon season which lasts from June to October. For many families like Daw Thuzar’s, the heavy rains brought worries and uncertainties. “Our old house was small and damaged,” she says, remembering the challenges her family faced while living in a thatched bamboo house.

As a mother, she is especially concerned about the wellbeing of her sons, Phon Pyae Han, 15, and Pyae Sone Maung, 9. “During the rainy season, our youngest son was often sick because of the mosquito bites.”

Daw Thuzar heard of Habitat for Humanity Myanmar when its staff met the families in Ma Kyet Su village at the end of 2016. With the support of the Bago government and the village administration, Habitat set up a local committee to select the future homeowners and conduct a housing needs assessment in January 2017.

Daw Thuzar was among the five families in Ma Kyet Su selected to partner with Habitat. She laid the foundation of her house in April 2017.

During the construction of their house made of treated bamboo, Daw Thuzar and her husband worked with local volunteers and helped by carrying bamboo and other materials at the build site.

Having moved in for almost a year, they are pleased with their new home. “The house has held up well in the rainy season. We have fewer mosquitos; before there were many,” says Daw Thuzar. She adds: “In the new house we have partitions, separate places to work, study, sleep and cook.”

Both Daw Thuzar and her husband U Aung Aung Oo have a preferred spot in the house. She says: “My favorite place is the verandah. I go there when I want to relax, get some fresh air and see the view.”

Like his wife, U Aung Aung Oo enjoys resting on the verandah. He also likes how his family receives him with a smile when he returns from work.

The children’s choice is the living room because it’s where they can do their homework and watch television.

With smiling eyes, U Aung Aung Oo shares: “Before we had to ask the kids to be quiet and careful in order not to damage the house. Now they can play and run.”

Learn more about
Myanmar
Share this page on your: