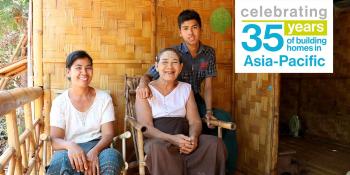 With a secure, permanent home, Myint Myint Sein, 42, has peace of mind because she does not have to worry about frequent house repairs. Her son has also acquired new livelihood skills during the construction of their Habitat home in Ma Kyet Su village on the outskirts of Bago City in central Myanmar.

“We raised our children in the old house. It was so small that my mother-in-law had to sleep near the door of the house and the children had to sleep in their grand-uncle’s house nearby,” says Myint Myint Sein. She recalls other problems such as the lack of a toilet indoors and the damage to the old house due to flooding during the rainy season.

Daw Yee, 74, her mother-in-law, adds: “We had to pay for repairs every year but the bamboo house was still damaged. The roof had a hole, the floor was breaking down, and the wall was collapsing.”

Things looked up when the family partnered with Habitat for Humanity Myanmar to build a new bamboo house in early 2017. Everyone including Daw Yee, who helped by preparing bamboo nails, actively supported the skilled workers and local volunteers.

During the construction of their house, Myint Myint Sein’s son Hein Zaw Htet, 20, also had the opportunity to be trained by the local contractors. He learned about the method of treating bamboo so it would last longer and become a more sustainable construction material.

“We were happy to contribute to building our own home. We are very grateful to Habitat for Humanity,” says Myint Myint Sein.

Hein Zaw Htet used to work together with his father U Myint Naing, a 46-year-old carpenter. After his training with the contractors, Hein Zaw Htet has found a job with the local bamboo cooperative.

His new livelihood makes a difference to Myint Myint Sein who earns a living by rolling tobacco. Their combined family income averages US$250 a month.

Their youngest son Hein Thiha, 17, has just completed his examinations. He contributes his earnings from harvesting beans to the family income. With a stable home, Hein Thiha dreams of becoming an engineer.

His family members are also experiencing positive changes. “I feel peaceful. This is a strong house that can withstand winds. I’m happy to live in this home,” says Daw Yee, pleased that visitors have noticed the colorful fabric panels sewn by her for décor.

She now has her own meditation space at home and can walk around freely without fear of damaging the floor, which is unlike the fragile bamboo floor of the old house. Smiling, she says: “My health is better now than in the old house. And the floor is comfortable to sit on.”

Now the family has adequate access to sanitation with the construction of a latrine just outside their home. “Before our ‘toilet’ had no roof and the ‘door’ was only a piece of cloth,” Myint Myint Sein says.

Her family uses rainwater that is collected in a pond behind the house and they can count on the support of the community to provide water when needed.

Their new home has another draw. Daw Yee says with a chuckle: “People now like to stop and admire our house.”

Learn more about
Myanmar
Share this page on your: