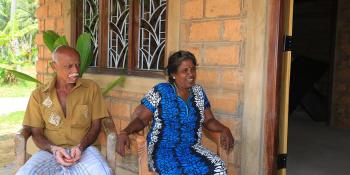 Yogeswary's family is the first to build their home with alternative materials under the European Union-funded “Homes not Houses” project in Sri Lanka.

MANILA (June 22, 2018) — Yogeswary, a 59-year-old farmer, is interested in the comings and goings in her village in northern Sri Lanka. The former women’s leader looks out into her home garden through small openings in one of the walls of her home — the first to be built with earth concrete blocks under the “Homes not Houses” project funded by the European Union.

By May 31, 2018, she is among 353 families who have built homes with Habitat for Humanity Sri Lanka. Those homes are built with either conventional bricks or alternative construction materials such as compressed stabilized earth blocks and earth concrete blocks. Another 1,836 homes are currently in different phases of construction in the eastern district of Batticaloa and the northern districts of Kilinochchi and Mullaitivu.

Yogeswary and her husband Nadarasa live in Thevipuram village, Mullativu district, northern Sri Lanka. Their sons Suthakaran, 35, and Sutharshan, 31, work in Jaffna city and would stay with them on weekends.

After being displaced by the civil war in 2009, she and her family returned to their village in 2011 to find that only the front walls and the floor of their earth house remained. Her family rebuilt their old house using wooden planks, tin sheets and thatch for the roof. Yogeswary said she applied to build a new house through another housing project between 2012 and 2015 but she was unsuccessful.

As the former president of the Women Rural Development Society, she is still used to taking the lead. In March 2017, when she first heard that earth concrete blocks were being produced in Thevipuram, her curiosity was piqued. “If anything happens in my village, I should know.”

She visited the ECB production yard in Mullaitivu and talked with a staff member of World Vision Sri Lanka, the joint implementing partner along with Habitat Sri Lanka. She tested the blocks by immersing them in water and tried to break them. The edges of the blocks were slightly chipped. “Whatever is new, I should investigate it,” she said.

From the beginning, she was confident of building a new house with the earth concrete blocks but her family did not agree with her. Her husband Nadarasa, 63, was concerned that the soil that was used to produce the blocks would attract termites, thus causing the blocks to erode during the rainy season.

Yogeswary argued that termites would only be a problem if no cement was used at all in producing the blocks. After he was persuaded, Nadarasa said: “Due to the strength of the earth concrete blocks, the termites can’t make holes in them.”

During construction, she and her husband cleaned up the build site, did backfilling for the septic tank pit and built a low wall to cover the drain pipe. Instead of pouring water over the blocks to cure them, Yogeswary ran a high-pressure water jet over them to see if they would crumble.

When construction continued through the rainy season, she would pinch the blocks to see if anything happened.

Her confidence in the blocks came across when she fielded questions from an estimated 600 people who have visited her home since its completion in December 2017. To visitors who were concerned about durability, she said: “I told them that the blocks are very good.”

The blocks also help to reduce the temperature. She remarked: “You have to go and sit outside to feel the heat and then go inside the house to feel the difference — it’s like having airconditioning.”

Before construction began, Habitat Sri Lanka provided two to three house designs at Yogeswary’s request. After a design was adopted, she made suggestions that led to changes such as a small opening in one  her kitchen so she can look out, and the construction of a kitchen shelf above the sink made of ferro-cement mixed with wire mesh. She took three days to make 36 clay tiles for the chimney so that the color would match the blocks that Habitat for Humanity Sri Lanka used to construct her home.

Habitat Sri Lanka’s staff also suggested using pieces of salvaged tiles and clay to produce the overhead filler slab so less concrete was used. One of the walls of the attached toilet was built with debris to reduce waste.

“I’m thankful to Habitat for their patience and for meeting my expectations,” she said.

Being the first to build with ECBs meant something to Yogeswary. Instead of her hair, she flipped the fringe on her dress’ neckline edge and said: “I am very proud and happy.” She remarked: “Now, I feel I have achieved a lot. After getting this house, I have full satisfaction.”
Share this page on your:
Facebook
Twitter
LinkedIn