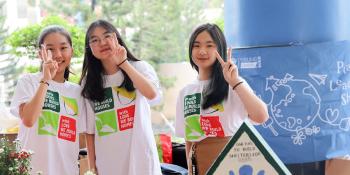 MANILA (Aug. 14, 2020) ― Habitat for Humanity’s Young Leaders Build triumphed in its most challenging season ever to mobilize over 2 million supporters to raise awareness and funds for decent housing in Asia-Pacific. In the most recent campaign that ended on April 25, volunteers and supporters worked on 233 houses and served 3,170 families in 16 countries and one special administrative region.

As with the previous eight campaigns, families worked hand-in-hand with the young leaders. In February 2020, Than Than Aye built a new bamboo house in Bago, north of Yangon, with Japanese youth volunteers. As she has to bring up three children — one of whom has special needs — on her own, she is unable to take on more work. “Our house was totally damaged years ago and we couldn’t rebuild it because of my low income, which was enough only for daily food for my kids,” she says.

Than Than Aye continues about her new home. “I have never dreamt of having this kind of house. This is the happiest I’ve been in my life. Now, my family is safe and comfortable.” With a secure home, Than Than Aye is determined to advance her children‘s education.

In January 2020, Atun, 97, moved into a new home in Mauk village, Tangerang, west of Indonesia’s capital Jakarta. She had spent a third of her life living in a termite-infested house. Her old house was also damp from leaks through the roof when it rained. Rats and other animals would get into the house and contaminate the food.

During the build with volunteers mobilized by Habitat Indonesia, Atun could not stop smiling and often expressed her gratitude. Currently living with two of her children and two grandchildren, Atun enjoys the sunshine and likes to catch up with neighbors during her walk around the village.

Volunteers and supporters have always been the prime movers of the campaign. This year, however, Habitat Young Leaders Build’s culmination activities took a different course. To prevent the accidental transmission of COVID-19 among volunteers, staff and the communities Habitat works in, in-person activities were suspended from February 2020.

COVID-19 response
Instead of building houses, many Habitat volunteers turned to online activism to help their communities cope with COVID-19. Vy Yaro, Habitat Cambodia’s Youth Ambassador, was slated to build a home in Cambodia on the campaign’s culmination day. Instead he recorded a video to check in with fans and remind them to follow safety protocols and public health recommendations.

Cambodian volunteer Prum Chanvattanak channeled his fundraising efforts in support of Habitat into producing a video to remind his peers to stay at home and observe social distancing as well as provide tips to reduce stress. “I hope the video will be helpful for our community during COVID-19. I believe that this is the power of youth,” he says.

In Thailand, members of Habitat school clubs raised more than 43,000 baht (about US$1,380) in a week through a virtual fundraising challenge. They appealed to their peers to support families in need of decent housing, particularly those whose house construction had to be postponed because of the pandemic. Through homemade videos, volunteers shared their experiences building alongside families and supporting Habitat’s mission.

Students from Don Bosco Technical Institute were among the youth who supported Habitat India’s initial response to COVID-19 by raising US$44,851. The funds enabled local partner organizations to distribute health kits and family essential kits to 2,903 families in various communities where Habitat India has implemented projects.

Toward the close of the 2020 Young Leaders Build campaign, the #SafeHomeChallenge drew youth support on social media. By posting a series of photos, the youth raised awareness of a safe home as the first line of defense against the coronavirus. By the end of June, there were more than 1,000 unique posts shared by individuals in over a dozen countries in Asia-Pacific as well as in Hong Kong, the Netherlands, the U.S. and Zambia. At least 1.46 million users have been reached on social media. The challenge is also part of Habitat’s global fundraising initiative Homes, Communities, Hope + You

#myBuilDiary
Adapting to the new normal, some supporters highlighted their own volunteer experiences and journeys with Habitat to raise awareness of the need for adequate housing and engage more young people.

Using the hashtag #myBuilDiary, students used various media to share their insights. “Even if you don’t have any idea about construction, that’s not a problem at all,” Jose Daniel says in a video he uploaded for the campaign. He first built with Habitat India in 2016 in JJ Colony, New Delhi, and has volunteered multiple times over the last five years.

Another volunteer, Ishita Agarwal, a student of King George V School in Hong Kong wrote, “Knowing that I was able to make a physical difference in someone’s life helped me realize just how real the housing crisis really is. Because I am fortunate to not have to worry about living in a place that is unsafe, that doesn’t mean I can ignore. I still have a duty to do my part and make sure that other people are able to experience living in a safe and clean house.” In July, she recorded a video to encourage other young people to volunteer.

Another repeat volunteer, Nepali business student Miraj Pokhrel, says: “Back in May 2011, I got the chance to volunteer with a Global Village team from Habitat Ireland. I helped build two houses in Budhabare.” He spent the next three years as a volunteer for Habitat Young Leaders Build, mobilizing local youth for a sanitation campaign led by him in Bhadrapur. He explains his commitment to the HYLB campaign is due to his enthusiasm for helping and building up other young people.

In Korea, supporters uploaded their childhood photos taken at home to highlight the importance of having a safe place in which to grow up. Every uploaded photo featuring the campaign’s official hashtag brought in a donation of US$1 by a local café that partnered with Habitat Korea. The funds enabled Habitat Korea to support children in need of a decent home