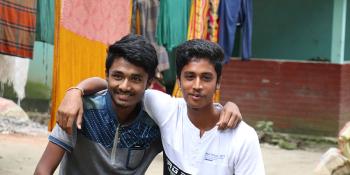 Living next door to each other, Prangon, 17, and Dipu, 19, have been good friends since they were young. Their families were among the first homeowners in Mymensingh district when Habitat for Humanity Bangladesh started its first-ever housing project there in 1999.

Their mothers shared a bond in watching their sons grow up. “I was so happy to hear Prangon call me ‘mama’ for the first time. It was the first word he uttered here at home,” says Kamona, 36.

When she got married at 16 or 17 years old, she had to leave the comfort of her parents’ house. Both she and her husband, Apu, 42, had the same goal of building their own home. It was fulfilled when they moved into their Habitat home in January 2002.

Dipu’s family became Habitat homeowners slightly earlier, in November 2001. His mother Joyantee, 40, recalls: “In this room, I first taught Dipu how to write. It was a proud moment for me as a mother.”

In Raghurampur village, where Dipu’s and Prangon’s families live, houses are traditionally made of straw and tin sheets. When the weather was hot, the houses provided little comfort. During the rainy season, leaks caused other problems. Families had to spend money making annual repairs that did not last.

Partnering with Habitat Bangladesh, each family had repaid 450 taka (US$5.40) per month toward the 42,000-taka cost of their house. Typically, a family took an average of six years to repay the loan.

Prangon’s family repaid their loan in November 2011 with what his father earned from selling cosmetics, stationery and other products. “I felt relieved after completing the loan payment. I didn’t have debt any more. We could finally say that now we fully owned our home,” says Kamona, Prangon’s mother.

Dipu’s mother Joyantee devotes her time to caring for her children while her husband Sanjib, 50, runs a tailoring business near the local market. She keeps the house spick and span and often cooks her children’s favorite food — sweet porridge and biryani rice.

“The sacrifice is all worth it. And it’s meaningful to have a house that our children will inherit as they establish their own families. That’s the ultimate happiness for us,” Joyantee says

In turn, their children have a lot of fond memories growing up in their homes. Dipu recalls: “When we were young, we would play hide-and-seek together with my brother and sister, and we would hide under the bed. We also enjoyed a game of carrom, when we were not busy with schoolwork.”

For Prangon, food held a special place in his heart. He says: “We enjoyed eating the pomelos and coconuts from nearby.”

Now in the twelfth grade in a local college, Dipu is studying to be a chemist. He likes exercising and does pull ups using steel rings suspended from a tree beside his home. An eighth grade student, Prangon enjoys reading books and playing the guitar.

“I hope to expand our home when I get a good job,” Dipu shares. “Our children will also grow up together as friends,” Prangon quips.

Habitat for Humanity Bangladesh continues to work with families to build strength, stability and self-reliance through housing. Find out more at habitatbangladesh.org or connect via facebook.com/HabitatBD