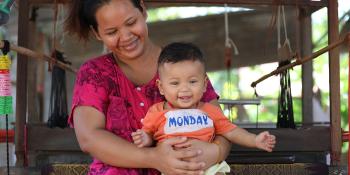 The weaving loom that is Senghouch’s means of livelihood fits nicely into a sheltered space outside her home on stilts. It was not always like this.

With her weaving skills, she could earn some money to supplement the US$150 month wages of her husband Cheat, 32, a steel factory worker. But the lack of a decent, spacious home made it almost impossible for her to weave traditional fabric for making dresses.

“The house was messy and cramped. Because of that, my husband and I would feel stressed, which led to bitter arguments,” says Senghouch, 27, whose family of four lives in Kandal province, Cambodia. That was back in early 2019.

In addition, her two children, then 5 years old and 6 months respectively, could hardly move around the house safely. Heavy rains and strong winds would rock their house, causing them sleepless nights and leaving holes in the walls and roof that had to be repaired regularly. Besides using the toilet in her mother’s house which was 30 meters away, they could also get water to bring back to their place.

In March 2019, Senghouch and Cheat took the step of becoming Habitat homeowners, leaving their inadequate living conditions behind. They were among 36 families who have built new homes with Habitat for Humanity Cambodia in a Dutch-funded project. Another 46 families gained access to safe sanitation through latrines built while over 8,400 primary students were trained in hygienic and sanitation practices.

With the help of Habitat skilled workers, the couple were able to build a durable home with their own toilet with sufficient space for the weaving loom. The family moved into their new house in Puk Russey commune, Khsach Kandal district, in May 2019. Having a place that they could proudly call their own has improved their family life.

“My husband and I can now have a proper conversation. We both felt secure having our own home. This lessened the stress,” says Senghouch. Now that she can work comfortably at home, she can earn up to US$40 for each swathe of fabric woven.

In the first six months after moving into their new home, she noted that her two children did not have diarrhea as often as before. It helps that her family, along with others in the project, attended training in water, sanitation and hygiene conducted by Habitat Cambodia.

Seeing Senghouch weaving at home has led her daughter Mengchou to take an interest in weaving. “I am happy to see my children thrive in our new home. I hope they can grow up well and have proper education.”

She is looking forward to saving money to set up a small business with her husband. “It could be a steel workshop or a tailor shop,” she shares.

Since 2003, Habitat Cambodia has served more than 90,000 families including Senghouch’s by the end of the financial year on June 30, 2019. Visit habitatcambodia.org or follow facebook.com/HabitatCambodia1/ to find out more.

Learn more about
Cambodia
Share this page on your: