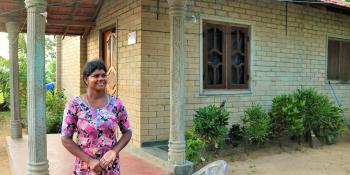 Over 12 years have passed since the civil war ended in Sri Lanka. Yet generations of families still bear the scars from the decades of violence and conflict. By building or repairing a place they can call their own, 2,370 families are starting a new chapter in life. They partnered with Habitat for Humanity Sri Lanka and World Vision Lanka under the European Union-funded “Homes not Houses” project completed in June 2021.

Thushanthini (main photo), 31, was raised by her aunt after her parents went missing during the 25-year civil war in Sri Lanka. To this day, she does not know what happened to her parents. Without any siblings or a home of her own, she was considered as among the most vulnerable in Navagirinagar village, Batticaloa, eastern Sri Lanka.

But she takes pride in a decision that she and her husband made in February 2018. “Ours was the first CSEB home in our tightly-knit community,” Thushanthini said. “Many of my neighbors came to visit us out of curiosity about this new material. Once they saw how versatile the bricks are and how nice they look even without plastering, the CSEBs became a popular selection for home construction.”

Her husband Mathivathanan is a mechanic and block-maker. In February 2018, he learned how to produce and build with CSEBs at the block yard run by World Vision Lanka in Batticaloa. Through a livelihood grant, he bought a hand-operated machine to produce the compressed stabilized blocks for the community as well as mold that he uses to produce bricks with decorative motifs. Almost one third of the 138 people trained in skills to produce and build with blocks were women. After being trained, 94 people were in block production yards with an average monthly income of 24,000-28,000 Sri Lankan rupees (about US$120-140).

The compressed stabilized earth blocks were among appropriate construction materials and technologies that were promoted in the “Homes not Houses” project implemented by Habitat for Humanity Sri Lanka and World Vision Lanka. Made of locally sourced materials, the energy-efficient blocks provided an alternative to mining sand and lowered the construction’s carbon footprint. The CSEBs are also known for the ability to keep a house cooler in hot weather and warmer when it is cold outside. In addition, a feasibility study published by the European Union cited CSEBs as a low-carbon, low embodied energy solution for sustainable development.

Based on a homeowner-driven approach, families managed their available resources using grants from Habitat Sri Lanka and built homes at their own pace with Habitat’s technical assistance to ensure construction quality. Although families had a choice of traditional construction materials like fired bricks and cement sand blocks, more than 1,000 of them or 45% of homeowners chose to build their homes with compressed stabilized earth blocks.

These homeowners included Nalini and Jeyanthini who had experienced hardships during the war-torn years. Now that they have a place to call home, they have built strength, stability and self-reliance.

“We only had a hut, and I still keep it behind our new home as a reminder of how far we have come. We have always made everything with our own hands, so building the house ourselves has brought me great satisfaction.” — Nalini

“Ever since we moved into this home in 2018, we have been blessed with good health and good income.” — Jeyanthini

As of June 14, 2021, a total of 2,370 returnee families have built or repaired their homes with Habitat Sri Lanka in the multi-year “Homes not Houses” project that began in January 2016. In addition, more than 46,000 people benefited from the project’s flanking measures implemented by Habitat’s partner World Vision Lanka. Such measures included disaster risk reduction mapping, establishment of small and medium-sized enterprises, and other capacity development activities. To improve communities’ resilience, culverts and roads were built, and flood water drainage systems were renovated.

Growing up without a decent home, Thushanthini has found stability in life. In the evening, she and her family often sit together on the veranda to watch the sun set. “This home,” she said, “is my most precious possession.”