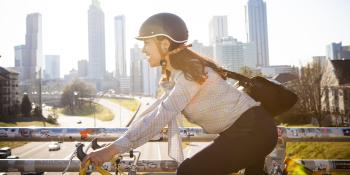 Ever think about forgoing your car and embarking on a carless lifestyle? Two excellent reasons to consider it: It’s a great way to reduce your carbon footprint, and a car donation to Habitat for Humanity can help make a life-changing impact.

The potential benefits of living carless abound and may include:

If you donate your car to Habitat, there are even more benefits:

Walk Score has developed a ranking system for grading walkability, biking and transit in urban areas. Using Walk Score’s rankings, I aggregated their data across all three measures and created a ranking of cities that are most conducive to a car-free lifestyle. Find that list and a little more information about each city below:

If you live in one of these cities, you may have the upper hand on jump-starting a new eco-friendly lifestyle sans automobile, but don’t be discouraged if you live elsewhere. Start by taking your bike to work or to run errands a few days a week. Walk when you can. Take the bus to pick up your groceries. Wherever you live, advocate with your community leaders to improve commuter options of all kinds. It only takes a few small changes to get the wheels turning toward a minimal or non-driving lifestyle.

Ready to let go of your car?

Reach out to Habitat’s vehicle donation program, Cars for Homes. Your donation will directly benefit your local Habitat and will help families build safe, affordable housing in your area.

We also accept cars that are totaled or nonworking. The steel parts of vehicles can be recycled, which reduces the release of harmful volatile organic compounds or VOCs from new steel production.

Learn more about our program or start a donation. Reduce driving, reduce emissions, create more affordable housing and live with intention. Let’s do this!

Get started
Learn more about
How to donate your car
Share this page on your: