The 2016 build week included a mixture of:

Habitat Memphis has been hard at work in Uptown for some time, and projects during the Carter Work Project week expanded that work north to Bearwater Park.

Take a look back on Habitat for Humanity’s flagship event that has helped create strength and stability for families and communities in Memphis, Tennessee. 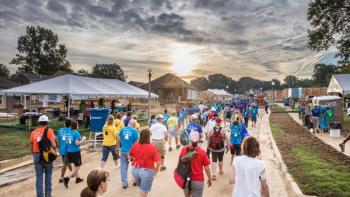 We thank the sponsors who made this year’s event possible!

Sponsors of the 2016 Carter Work Project offered generous financial support and teams of enthusiastic volunteers to work alongside homeowners building and improving places to call home. 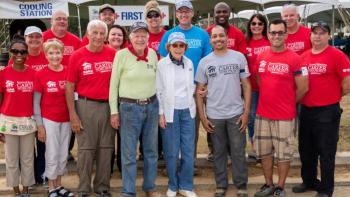 Check out this year’s house photos, featuring volunteers from the 2016 Carter Work Project.

What inspires you to build with Habitat?

President and Mrs. Carter. Making a difference. The future. These are just a few of the answers that volunteers and future Habitat homeowners gave at the Carter Work Project when asked, “What inspires you to build with Habitat?”

This year’s Carter Work Project got started bright and early with President and Mrs. Carter arriving at the Bearwater Park neighborhood eager to get to work.

President and Mrs. Carter and country music stars Trisha Yearwood and Garth Brooks, along with dozens of volunteers, recently helped raise the walls of a home to announce the Carter Work Project 2016.