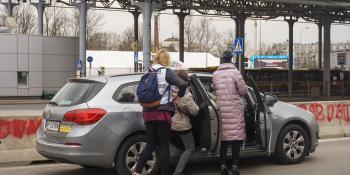 Ukraine Crisis: Habitat for Humanity helps refugees on the move and those needing housing

WARSAW (April 5, 2022)— As millions of refugees flee violence in Ukraine, Habitat for Humanity continues responding in neighboring Poland, Romania, Hungary, and Slovakia to help meet the shelter needs of both families on the move to other destinations and those seeking a place to live for at least the next few months.

In Romania, where many refugees are transiting through the country to other parts of Europe, Habitat for Humanity has secured hotel accommodations for more than 1,000 refugees and is distributing 3,000 emergency travel kits. Habitat Romania has given out the kits, which include power banks, at two border crossings and is now focusing on distributions at the Bucharest train station.

Habitat for Humanity Poland, meanwhile, is operating a housing help kiosk at one of Warsaw’s main transit stations through a partnership with the city, matching refugees with mid-term accommodations listed in a city database of 4,000 households willing to host families as well as apartments and homes secured through other means. Habitat Poland’s ReStore in Warsaw furnishes units where Habitat is placing refugees while also acting as a source of furniture, bedding and household supplies for host families who have opened their homes to refugees. From its transit station kiosk, Habitat Poland also helps refugees who are moving on to other locations by covering hotel stays so they can regroup and prepare for the next leg in their journey.

But even as we meet refugees’ immediate shelter needs, Habitat is coordinating closely with government officials and partners to find mid- and long-term housing solutions. “The people of Europe have been incredibly generous in opening up their homes to refugees,” said Rick Hathaway, Habitat’s vice president for Europe and the Middle East. “But we know cities such as Warsaw are filling up and thousands of additional refugees are arriving from Ukraine daily. So Habitat for Humanity is looking several months down the road and identifying what must be done now to meet that critical future need.”

Habitat Poland, for instance, is offering housing and construction expertise to governments and other partners to explore the feasibility of repurposing so-called empty spaces – such as unused schools and factories – that can serve as shelter for refugees. And in Warsaw, Habitat plans to expand a “social rental program” it piloted with the city over the past four years. The rental program acts as a mediating agent, leasing units and then renting them at affordable rates to tenants who can’t afford the free-market rates. Habitat ensures rents are paid and that units are returned in a condition no worse than at the beginning of the lease. We are now tailoring the program for refugees, who will need a larger subsidy at the outset as they look for jobs and integrate into communities. And we plan to share the model with other cities in Poland that may want to create their own social rental agencies.

Habitat Hungary, meanwhile, is facilitating transitional accommodations of refugees in and around Budapest, helping mediate between landlords and refugees, including legal agreements for use of the apartment, as well as translation services and transportation. Habitat expects to manage 100 rental units in the city that can accommodate families for 6 months or more.

Habitat has addressed shelter needs in Central and Eastern Europe since 1992, working in Poland since 1992 and in Romania and Hungary since 1996. Habitat’s regional offices for Europe and the Middle East are based in Slovakia.

Those who wish to support Habitat’s disaster response efforts in the countries bordering Ukraine and other communities around the world can donate to our Disaster Response Fund.

Habitat for Humanity this week began distributing hotel vouchers to families fleeing the violence in Ukraine as we ramp up our efforts to reduce the vulnerability of refugees and meet their shelter needs in Hungary, Poland, Romania and Slovakia.

Habitat for Humanity issues statements on the Ukraine crisis

“We at Habitat for Humanity continue to pray for the people of Ukraine as we watch the disturbing images of deadly attacks on the country. We are deeply concerned that the violence will claim more lives and force more families from their homes.” Jonathan T. M. Reckford, President and CEO of Habitat for Humanity International