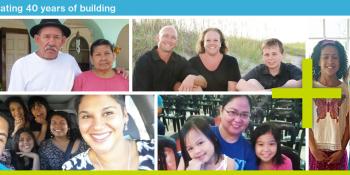 Four families, plus one

These families describe their Habitat homes as places to share good times — and weather challenging ones. Places for their kids to grow up healthy and secure.

No matter their hometown, all say a stable home has made them a stronger family. Help us celebrate these five — and all the families they represent who also have achieved that same strength and stability in Habitat’s 40 years of building.

Four decades ago, Ernesto and Sylvia put their faith in a fledgling nonprofit that wanted to work side by side with families so they could know the strength, stability and self-reliance that comes with homeownership.

“We didn’t have anything so I said, ‘Let’s give it a try,’” Sylvia says. “We were willing to take a chance, and we believed it would happen.” She and her husband partnered with the first local Habitat started in their hometown of San Antonio.

Ernesto says Habitat helped him provide a good home for his family. He and wife raised four children in their house, which they paid off 2006. The home, which Sylvia says has brought her family stability and unity, now sees plenty of visits from grandchildren and great-grandchildren.

“I tell other people to work with Habitat and get involved,” Ernesto says. Owning a home “is possible if you are willing to work for it; I feel so proud.”

When Monica partnered with Habitat Central Arizona more than a decade ago, she was sharing a tiny, one-bedroom apartment in Phoenix with her three little children, the youngest just a few months old. “I knew I had to make a change,” Monica says.

Despite a fear of heights, Monica helped put on her roof as part of the hundreds of sweat equity hours she performed to become a homeowner. “You are building your home, and you are building other people’s homes in the process,” she says. “Every time I make my mortgage payment, I know that is going back to building new homes.”

Monica’s family has grown. Not only is she raising her own kids, she is raising the niece and nephew she adopted.

A place where laughter fills the halls — that’s how Monica describes her house. “The kids say it represents a place of security, stability, and where love endures through any and every thing.”

We last checked in with Monica in 2009; watch the video.

In 2008, Shannon and her son, Kobe, then 8, were forced to evacuate the home they were renting after historic flooding in Iowa. With nowhere else to go, they soon moved back into the house.

“It was horrible,” Shannon says. “Being around all the mold caused Kobe’s asthma to flare up. He was on steroids all the time. He was sick all the time.”

Then Shannon partnered with Cedar Valley Habitat, which she calls one of the best decisions she has ever made, along with having Kobe and marrying her husband, Steve.

Since building her house during Habitat’s 2009 AmeriCorps Build-a-Thon, Shannon has experienced health issues of her own, but her affordable mortgage has allowed her to keep up. Meanwhile, Kobe’s health problems went away almost immediately.

The house has offered her son, who is now 16 and driving, even more. “Stability — that is the biggest thing,” Shannon says. “Before, we moved all the time. Kobe has been able to make friends because we lived in the same neighborhood for an extended period of time and he has been at the same school. Now he has permanency. He has more of a feeling of home. He finally knows what that means.”

Rosemarie used to cry when it rained because the place where her family was living would flood. “I saw my children crying and so afraid. You can do nothing but cry with them. It was a feeling of helplessness.”

That feeling is gone since Rosemarie and her husband, Ryan, partnered with Habitat Philippines. In 2014, their family moved into a new Habitat home in a new community called Bistekville. Their house was built to resist earthquakes, hurricanes and floods. “When we moved in, things got better and better for us,” Rosemarie says. “Our children enjoy the new house and surroundings. They have a new batch of friends.”

Rosemarie and her family also don’t worry when it rains. “Now we have a decent, safe and secure house to live in,” Rosemarie says. “We can now sleep well at night without worrying about our safety, especially during the seasons of typhoons here in the Philippines. We are blessed.”

We first met Rosemarie and Ryan in 2014; watch the video.

For a long time, Amanda moved with her young daughter, Maddie, every year or so. “We used to live there and there and there,” Amanda says. And after paying the rent, there was not much money left.

Amanda says that Habitat not only taught her how to build a house but also how to keep a house. “And to plan for your future. And be a better parent.”

“The biggest change the house has made to me is a sense of pride,” Amanda says. “It is something that I have accomplished, that I am proud of, and can continue to work on, making me a stronger person. My daughter has seen how hard I have worked and how important it is. Being a good role model for her makes me extremely happy.”

The biggest change for Maddie, her mom says, is having roots. “Since she was born, I wanted her to have a strong sense of who she is and comfort in knowing where she belongs. It makes a difference that she has a place to go that is her own.”