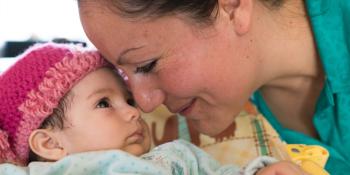 The connection between a decent place to live and a healthy kid was a “eureka” moment, says Dr. Megan T. Sandel, an associate professor of pediatrics at the Boston University Schools of Medicine and Public Health. She also is a nationally recognized expert on housing and child health and development.

The light for her went off after a 2-year-old patient who had fallen way behind on the growth chart suddenly started sprouting. “It soon became clear to me why,” Sandel says. The toddler’s family had moved from an overcrowded, unsuitable apartment to a better one. “The prescription that this child needed was a stable, decent, affordable home. They don’t stock those at the pharmacy.”

Q: Why should people care about the effects of housing?

A: We all know that you need a stable home to be the foundation of anything. While it may seem like helping someone have a stable home only helps them, you are missing an entire ripple effect in how much that helps the community.

If you have a kid who is stable and is showing up to school, that makes everyone in the classroom learn better. People with a stable job are paying taxes, and employers don’t have to go through the expense of firing people and training new people to come on board. There is really good evidence around public safety that shows that stable communities are safer communities.

Q: Can you talk more about how you made the link between children’s health and development and housing?

A: I am the associate director of the Grow Clinic for Children at Boston Medical Center. The clinic is for kids with “failure to thrive” — kids who are at least an inch off the growth curve. In another country, that would meet the World Health Organization’s definition of malnutrition.

I had one kid who looked like a very cute 2-year-old but had not yet outgrown his 12-month-old clothes. He was severely stunted and wasted and not growing. I was tearing my hair out trying to get this kid to grow. I was ordering a lot of expensive tests, nutritional shakes and medicines. Nothing was working.

All of a sudden, he started growing. His family had gotten off of an affordable housing waiting list. They went from sleeping in a living room in an overcrowded family member’s apartment to an apartment of their own. This child now got to sleep in a bed by himself through the night. He got to sit at a table and not be distracted by different people coming and going. And he got to eat better. All of those things were things that he needed to grow.

Q: How exactly does housing affect children’s health and development?

A: I tend to focus on four different dimensions of housing that impact health.

Stability. Is the family staying in the same place or are they at risk of homelessness or eviction?

Affordability. Is the family able to afford their home without having to make other sacrifices like food or heat or health care?

Location. What are the neighborhood and the community where the home is like? All of those dimensions are incredibly important to children’s health.

Q: You have compared quality housing to a vaccine.

A: We have a research policy network at Boston Medical Center called Children’s HealthWatch. We have looked at the high-risk families we have interviewed.

Having that subsidy for housing protected kids from biologically being affected by their food insecurity. It gave them some immunity. That’s why I think of a stable, decent affordable home as acting like a vaccine. It gives you resilience, or immunity, against future threats.

Q: The connection being that families who spend too much on housing can’t afford groceries?

A: I think of hunger and unstable housing as being the twin demons for low-income kids. Too often families are having to choose between rent and eating.

Q: You started writing about the effects of housing on child health and development two decades ago. Has anything changed over time?

A: We are definitely talking more about the connection between housing and health.

I think, though, the need has grown. We have to acknowledge that we have an affordable housing crisis. One in four renters — so 11 million of the 44 million renters out there — are paying more than 50 percent of their take-home income on rent. That is projected to increase by another 2 million households over the next decade. You add to that an estimated 2.8 million at risk of eviction annually and over half a million people who are homeless on any given night. Too often, we talk about one type of housing problem or another type of housing problem without understanding it as a totality. We are just beginning to understand the depths of the need out there.