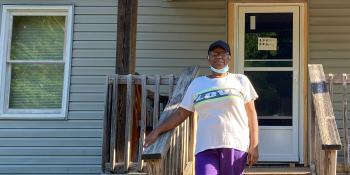 A legacy of love

Whenever it rained, Jessie’s roof leaked. She had to grab a bucket or towels to catch the water pooling on her floor. Even more worrisome, her home’s antiquated electrical system was in dire shape. Even something as simple as plugging in a kitchen appliance could overwhelm the system and shut the power off.

There was also fire damage around Jessie’s circuit breaker box, and the wiring had burned in one spot behind her kitchen wall. “It’s been bad trouble with the electricity because the electricity never had been rewired,” says the 71-year-old South Carolina native and grandmother of four. “This house is old. I mean old.”

Jessie’s father purchased the gray, single-story home where she’s lived most of her life when she was a young girl. It was his hope that the home would be a place their family could enjoy and pass down to future generations. “To me, it’s a legacy my father had for us and left for us,” says Jessie, which is why she reached out to Habitat for Humanity of York County to see if they could help her make her home safe and preserve her father’s legacy.

During the initial assessment of Jessie’s home, it was clear that overhauling her electrical system was a top priority, as well as a replacing the aging roof. “Essentially, her wiring in her house was kind of patched together. It was not done to current code,” says Haley Lutz, homeowner services manager for Habitat York County. Though Jessie’s application was approved, obtaining the funding for the home repairs via a state grant proved to be a challenging and lengthy process. When Habitat York County learned about the possibility of a grant from Wells Fargo Builds – it was a blessing and a relief. “The Wells Fargo Builds funds that could be applied to repairs were the best thing that could have happened for this project,” says Haley. “It provided us a path to serve Ms. Jessie. We could attend to the major repairs her house needed in a way that was timely.”

Wells Fargo has partnered with Habitat for more than 27 years to help families build strong and stable homes and communities through new home construction, repairs revitalizing neighborhoods and helping older adults, like Jessie, remain in their homes. “We know homeownership is a way for individuals and families to create wealth and transfer that wealth to their family for generations to come,” says Rodrick Banks, senior community relations consultant, social impact and sustainability of the greater Charlotte market for Wells Fargo. “So Wells Fargo has taken an approach to focus on housing affordability across the spectrum of housing with the ultimate goal of encouraging and promoting homeownership.”

Currently, through Wells Fargo Builds, Habitat affiliates like Habitat York County work with low- and moderate-income homeowners to build and repair homes. The collaboration with Habitat is part of a $1 billion philanthropic commitment by Wells Fargo to create more housing affordability solutions by 2025. Last year, Wells Fargo Builds grants helped Habitat partner with families to build and renovate 387 homes across the U.S. Rodrick says supporting home repairs is critical to helping families in York County and beyond stay in their homes and communities in an affordable way — and to do so safely.

A safe place to heal

Jessie temporarily moved out of her home while repairs were made to her electrical system. During that time, she was undergoing cancer treatment and says not having to worry about her roof leaking or her electricity failing aided in her recovery.

“She was not feeling good during the process. I mean, she was really struggling.” says Haley. “And then towards the end, when she was finally able to get back home – she was back to her positive self. I mean, being in your home changes things, your outlook. It makes you feel better being in your own home again.”

Now in remission, Jessie, who considers herself to be a homebody, loves being able to relax in her home with the knowledge it’s safe and secure and will continue to be a gathering place for her family year after year. “I enjoy it. I really enjoy it,” she says.

More stories
Homeowner stories
Learn more about
HFH of York County
Share this page on your: 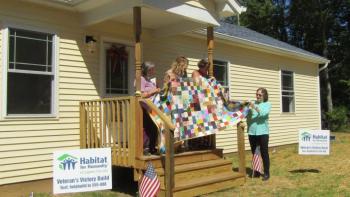 When her roof caved in, Vietnam-era veteran Marjorie partnered with Habitat for Humanity of Lapeer-Tuscola to build a safe, new home with help from a grant from Wells Fargo.

Sign up for our monthly newsletter to get the latest news, volunteer opportunities, DIY tips and other ways to get involved with Habitat for Humanity.