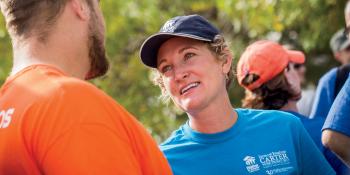 Why is community service so important?

A Q&A on how helping others brings people together

Q: How long has service been a part of your life?

A: My parents didn’t make a big deal about volunteering or donating or service — it was just part of who we were as a family. When I was in middle school, I went to Sunday school class, and there was a young girl about my age. The teachers introduced her as the daughter of the Habitat homeowner partnering with our church. She didn’t say much but shared that her family had come from Cambodia. She showed us a picture that her younger brother had drawn of her family in front of their new Habitat home. They were stick figures, and their heads had these ginormous smiles. There was a little house in the background.

I grew up in a working class community and had not really thought about the fact that there might be kids who didn’t have homes. I started volunteering with my youth group in high school, going to hurricane-hit areas in South Carolina and to the Appalachia region in West Virginia. I’ll never forget swinging a sledgehammer, which is the coolest thing as a teenager. Being exposed to people who were in very different circumstances felt important, felt like something that I should do.

As a grown-up, you have worked for nonprofits focused on eliminating hunger and teen pregnancy. Through Habitat, you have helped make homeownership a reality for many families. What does this life of service do for you?

It is pretty simple — I get to be a part of something that is much bigger than myself.

I will probably never see a day where every human being has a place to call home. Yet I know that I am part of the critical building blocks to getting to that day. Being part of a movement is transformational for me and for everyone who gets to be involved in it. I often tell our volunteers, “At Habitat, we get to be around the best of humanity.” I feel very lucky that I get to be in that space every day.

I also hold as a core fundamental value that no one, from the poorest to the richest, is successful without the help and support of others. There are just different ways that happens. And growing into our full potential is our ultimate goal as individuals. Being a part of helping others helps me to do that.

Do you ever get discouraged?

I have had the ability to see a lot of different social issues and understand the complexities of them. What I have found is that if we don’t solve housing, we will never solve other social issues. Having that will is often missing and that can be discouraging. But moments of feeling down are lifted pretty quickly.

It’s hard not to be inspired by Habitat volunteers who say, “I have no idea how to build a house, but I will certainly try.” Or “I have never raised money before, but I am willing to ask.” Or “I don’t know exactly how I am going to pay for my kids’ college, but I will write you a check.” Focusing on what people are willing to do keeps me from getting too overwhelmed by the enormity of the challenges that we face. I think that there is an underlying goodness in people that is reflected in service.

Why do you think young people should be involved in service?

I have two little kids, and I think a lot about the younger generation. I look at technology and all of the things we rely on today that are either pulling us apart or isolating us. Connections between people are what make us human. Service brings us together. It bridges ideological differences, theological differences, economic differences. It focuses on our common humanity.

I think about that young Cambodian girl who came into my Sunday school class to share her story and her little brother’s picture. She helped me understand that we are all in this together. I can’t imagine my life without service.

— Heather Lafferty, CEO and executive director of Habitat for Humanity Metro Denver since 2008