The much beloved former president and first lady, who are celebrated as Habitat’s most famous volunteers, are enjoying their retirement in Plains, Georgia, and will not attend the 2023 project. Together, from 1984 until 2019, they served as champions and strong voices for decent, affordable housing around the world, having worked alongside more than 104,000 volunteers in 14 countries to build, renovate and repair 4,390 homes during that time.

“Though we could never fill their shoes, we are so incredibly honored to be given the opportunity to carry President and Mrs. Carter’s legacy forward through the continuation of the Carter Work Project,” Brooks said.

Over five days, future homeowners will work alongside Brooks, Yearwood and hundreds of other volunteers from Charlotte and around the world to build 20 single-family affordable homes on nine acres of land.

Habitat Charlotte Region broke ground on the project Sept. 8, 2021. With seven homes already under construction, the entire 39-home project is expected to be completed by early 2025.

Thank you to the generous sponsors of the 2023 Carter Work Project. 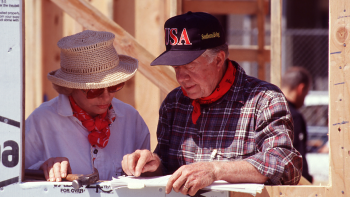 We have been honored to have two of the world’s most respected and famous people as dedicated and hardworking Habitat volunteers for more than 35 years. Former U.S. President Jimmy Carter and former first lady Rosalynn Carter have been tireless advocates, active fundraisers and some of our best hands-on construction volunteers. 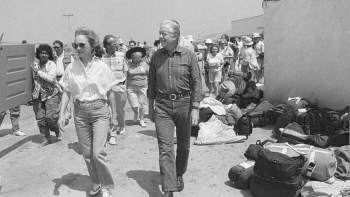 Carter Work Projects through the years

Since 1984, President and Mrs. Carter have been building and advocating for affordable housing alongside Habitat for Humanity for over 30 years. Journey through the incredible legacy of Carter Work Projects!