Habitat for Humanity in Bangladesh

Since 1999, Habitat for Humanity Bangladesh has been working with low-income families to build strength, stability and self-reliance through shelter. Habitat Bangladesh currently operates in Dhaka, Chattogram, Mymensingh, Jamalpur, Khulna and Barishal districts. The programs include decent, affordable housing, clean water and safe sanitation, training in appropriate construction technology as well as disaster response and mitigation.

The housing need in Bangladesh

Due to the economic fallout from the COVID-19 pandemic, Bangladesh’s poverty rate has increased from 21.6% in 2018 to 42%in 2020, a survey by Dhaka-based South Asian Network on Economic Modeling revealed. According to government estimates in 2018, at least 1,418 people were being added to the population of Dhaka every day. People move to urban centers in search of work or after losing their homes and livelihoods following disasters fueled by climate change. UNICEF estimates there are 4 million slum dwellers in Dhaka. Three in four slum households live in one room, often lacking access to clean water, safe sanitation and waste management. Slum dwellers also face eviction threats as well as disaster risks from living in low-lying areas.

How Habitat addresses the need in Bangladesh

Habitat Bangladesh works with partners and volunteers to provide decent homes as a way out of poverty. Responding to disasters such as cyclones or storms has enabled Habitat to help Bangladeshi families rebuild more resilient homes. Improving communities’ access to clean water and safe sanitation along with raising hygiene standards lead to better attendance in school and greater economic productivity.

Future homeowners build core houses comprising one room, a toilet and a veranda with the option of expanding their living space in the future. Habitat Bangladesh provides technical support to families and training to construction workers in building or renovating homes.

Habitat helps disaster-affected families through the distribution of emergency shelter kits and transitional housing in the initial phase and provides technical support when reconstruction takes place. Since 2007, Habitat has enabled more than 6,000 families to rebuild their homes and lives and to better prepare for future disasters.

With funding from the Australian government, Habitat had improved the lives of about 10,000 slum dwellers in Dhaka city in its first urban project that began in 2012. Habitat Bangladesh also engages multi-sector partners through urban forums and dialogues organized since 2014. In April 2019, Habitat Bangladesh and other members of a multi-sector steering committee launched the Bangladesh Housing Forum—a collaboration platform for local housing stakeholders—at a national seminar in Dhaka. The committee also issued a seven-point declaration to address housing and land issues in Bangladesh.

There are currently no scheduled Global Village builds as Habitat prioritizes the health and safety of our staff, volunteers, partners and the people we serve amid the COVID-19 pandemic. Local volunteers continue to lend their support through the annual Habitat Young Leaders Build by raising awareness and funds and speaking up for housing needs. 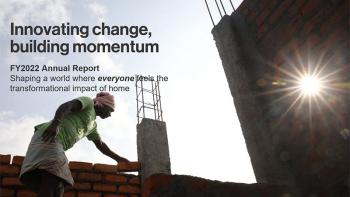 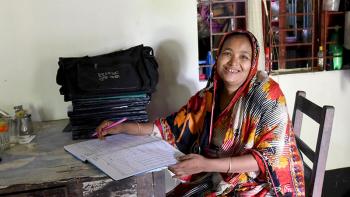 Sakina could start building a better life for her family after becoming a Habitat homeowner in Bangladesh.

Shirin is actively creating a better life for her family by rearing goats and tending to her fruit garden. “Even at home, I can do some work and raise my family.” 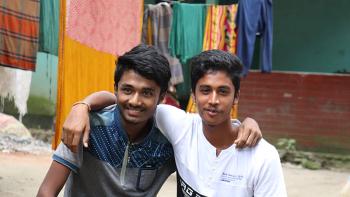 Buddies Prangon and Dipu, who grew up in Habitat homes in Bangladesh, hope their children will continue the friendship.