Habitat for Humanity in Singapore

Habitat for Humanity Singapore began operations in response to the urgent reconstruction needs following the Indian Ocean  tsunami  in 2004. Since its inception, Habitat Singapore has continually mobilized volunteers under the Global Village program for building projects across the Asia-Pacific region in countries such as Cambodia, Indonesia, Thailand, India and more. In Singapore, the Project HomeWorks program seeks to improve the living conditions  of vulnerable older persons and families living in public housing across the island. To date, more than 30,000 volunteers from Singapore have worked on over 1,300 builds in the Asia-Pacific and almost 3,000 local home improvement projects. Habitat Singapore is also involved in fundraising and advocacy initiatives in the Asia-Pacific region and other parts of the world.

Habitat for Humanity Singapore began operations in 2004 by mobilizing volunteers to rebuild homes following the Indian Ocean tsunami. While Habitat’s Global Village program is suspended due to the pandemic, local volunteers help to improve the living conditions of vulnerable households under Project HomeWorks. These households include older persons who reside alone in one-room rental apartments and are unable to physically care for themselves. Habitat Singapore partners with volunteers to remove clutter and clean up unhygienic, often pest-infected living conditions. Based on government data, in 2018, the number of older people living on their own is expected to rise from over 50,000 in 2018 to 83,000 by 2030.

How Habitat addresses the need in Singapore

The Project HomeWorks program was conceived to improve the living conditions of vulnerable groups such as older people and those with illnesses or with disabilities living in public rental flats all over the island. Volunteers are mobilized to clean up homes, make minor repairs and ensure facilities meet safety standards. Since 2006, more than 15,000 volunteers have participated in almost 3,000 home improvement sessions. In addition, Habitat Singapore raises awareness of the need to eliminate substandard housing through high-profile events such as Home Sweep Home and LitteRally.

Habitat Singapore has partnered with several corporations, charitable foundations and non-governmental organizations. Singapore-based celebrities such as Paul Foster, Eunice Olsen, Corrinne May and Anita Kapoor lend their support as Habitat Singapore’s ambassadors. Members of campus chapters, a few of which have been established in local tertiary institutions, also volunteer, raise funds and advocate for Habitat.

Project HomeWorks is a local volunteer program in which Habitat Singapore’s supporters work with vulnerable households to make their homes clean, safe and healthy. Many of these households include older people living alone, people living with disabilities and low-income families. Volunteers help declutter and clean up these homes —often small rental units —and replace pest-infested furniture. Since 2006, more than 17,000 volunteers have helped to rehabilitate over 3,200 homes.

Through Habitat’s Global Village program, teams of volunteers from Singapore partner with families in need of decent, affordable housing to build homes in the Asia-Pacific region. To date, Habitat Singapore has mobilized more than 15,000volunteers who took part in over 1,400constructionbuilds. Popular destinations include Indonesia, Cambodia, Thailand and Nepal. Due to Singapore’s proximity to the Indonesian island of Batam, Habitat was able to mobilize volunteers to improve lives in Kabil village through new homes and adequate access to water, electricity and drainage. 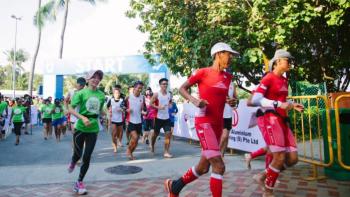 Getting active in support of Habitat Singapore

A record number of participants — more than 6,000 — took their shoes off for the seventh annual Bare Your Sole, the flagship charity walk event of Habitat Singapore.