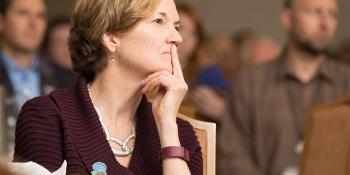 WASHINGTON (May 1, 2015) – On Thursday, April 30, President Obama signed the Energy Efficiency Improvement Act of 2015, legislation supported by Habitat for Humanity International, enacting key energy efficiency provisions that will strengthen the economy, reduce pollution and produce significant energy savings. The act is an important win for advancing energy efficiency efforts nationwide through three simple but effective provisions that are designed to spur the economy by creating jobs, enhancing energy security and cutting greenhouse gases.

“We applaud Congress for its bipartisan support of this legislation to advance energy efficiency efforts that will benefit the economy and reduce environmental impact across the country,” stated Elisabeth Gehl, associate director of federal relations at Habitat for Humanity International. “Recognizing the long-term benefits of lowering energy use and costs, Habitat for Humanity strongly supports efforts that will increase energy efficiency for all buildings, including those in the residential sector. As such, we encourage Congress to continue this positive momentum by supporting other legislative efforts that will further energy efficiency in this country such as the Weatherization Enhancement and Local Energy Efficiency Investment and Accountability Act, which will address lowering energy costs for low-income families through needed retrofits on their homes.”

See President Obama’s remarks prior to signing the bill into law.

Sign our petition to join Habitat for Humanity in supporting SB 703, the Weatherization Enhancement and Local Energy Efficiency Investment and Accountability Act, and serve more partner families across the United States.