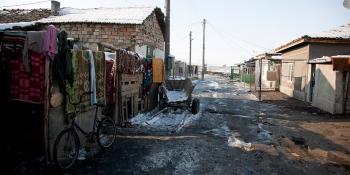 Vulnerable groups often face poverty and exclusion, even in the developed countries of Europe. Whole communities are deprived of opportunities and pushed to the margins of society where they are locked in a cycle of poverty that they cannot break out of.

In Europe and Central Asia, Habitat makes a special effort to reach out to vulnerable groups such as Roma and people with various disabilities.

Often called the European largest minority, through the years the Roma have endured the suspicion, discrimination and often violence in the countries of Central and Eastern Europe. They are routinely denied education, employment and easy access to health care.

Roma families very often live in very poorly built substandard homes, in which they do not have water supply or sewage connection. These houses are small and cramped—in many cases, there is less than 5 square meters of living space per family member. As much as 77 percent of the families have outdoor toilets, and 58 percent use water from a tap installed outside the house.

In Slovakia, Habitat has actively worked with Roma since 2006. In partnership with the local nonprofit organization ETP, Habitat is disbursing small loans for home improvement purposes. In addition to the loans, Habitat trained ETP to provide financial education to low-income families.

In Bulgaria, Habitat for Humanity launched a project to adapt living environment to children with disabilities. Apartments are reconstructed to meet special needs: wide doors, extra spaces, holding devices in bathrooms and toilets, sockets and switches at accessible heights. Habitat Bulgaria works on this project in cooperation with the Center for Independent Living.

In Kyrgyzstan, Habitat has partnered with the Open Society Institute and Soros Foundation Kyrgyzstan on a pilot project Addressing Physical Barriers to Social Inclusion. Habitat supports families with mentally disabled members. It offers them a hand up in renovating and completing unfinished houses.