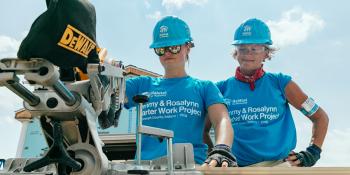 Bratislava, May 12th, 2019 – Stanley Black & Decker, the world´s leading tools and storage company, and Habitat for Humanity, the leading international housing charity, are proud to announce a new multi-year partnership in Europe.

By donating tools, funding and volunteers, the company has been actively supporting Habitat for Humanity in the USA since 1987. Stanley Black & Decker employees were joining their hands and hearts to build homes alongside with the Habitat’s homeowners in USA.

Habitat is now excited to expand the partnership with Stanley Black & Decker to Europe, where we will together help families in need in Bulgaria, Great Britain, Hungary, Ireland, Macedonia, Northern Ireland, Poland and Romania to rebuild their homes and their lives.

Inspiring makers and innovators to create a more sustainable world

“We at Stanley Black & Decker are proud to have strengthened and expanded our partnership with Habitat for Humanity in Europe,” stated Kirsten Yperman, Talent Management Director GTS EANZ at Stanley Black & Decker. “This is the beginning of an exciting collaboration in line with our 2030 CSR Strategy that aims to Empower Makers, enabling 10 million creators to thrive in a changing world. We are joining forces to empower citizens with vocational training, STEAM education and access to makerspaces. Together with Habitat for Humanity, we can support communities with our tools and expertise.”

In 1843, Frederick Stanley started a small shop in New Britain, Connecticut, to manufacture bolts, hinges and other hardware of high quality from wrought iron. In 1910, Duncan Black and Alonzo Decker started their shop in Baltimore, Maryland, and six years later obtained the world’s first patent for a portable power tool. Over the years, the two companies amassed an unparalleled family of iconic brands and trusted products. In 2010, they came together as Stanley Black & Decker, a leading global diversified industrial.

Habitat for Humanity’s vision is a world where everyone has a decent place to live. Anchored by the conviction that housing provides a path out of poverty, since 1976, Habitat has helped more than 22 million build or improve the place they call home. Habitat also advocates to improve access to decent and affordable shelter and offers a variety of housing support services that enable families with limited means to make needed improvements on their homes as their time and resources allow. As a nonprofit Christian housing organization, Habitat works in more than 70 countries and welcomes people of all races, religions and nationalities to partner in its mission.