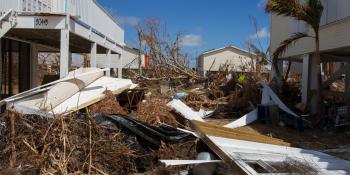 Habitat for Humanity at COP27: Adequate and affordable housing central to achieving mitigation and adaptation goals

Sharm el-Sheikh (November 7, 2022) — Habitat for Humanity International is calling on delegates at the COP27 climate change conference to prioritize adequate and affordable housing, particularly for the most vulnerable people, to achieve a net-zero future for carbon emissions and meet the adaptation needs of human settlements.

“The global community needs to put people most affected by climate change at the center of our interventions”, said Patrick Canagasingham, chief operating officer at Habitat for Humanity International. “Housing and climate change are inextricably linked. Failing to establish integrated policies and systems risks the health and well-being of the world’s most vulnerable populations.”

The 27th Conference of the Parties meeting, or COP27, is the latest in a series of UN climate change conferences and marks the 30th anniversary of the adoption of the United Nations Framework Convention on Climate Change. It opened Sunday and runs through Nov. 19 in Sharm El-Sheikh.

Habitat, an official participant at COP27, released a list of policy priorities and recommendations for the conference, urging UN agencies, multilateral financing institutions, governments and stakeholders to incorporate adequate and affordable housing into future responses to climate action, both when it comes to mitigation and adaptation efforts.

“While we recognize the urgency to meaningfully address mitigation needs globally, we must not forget about the growing housing gap for millions of people around the world,” Canagasingham said. “According to the United Nations, 3 billion people will need access to adequate housing by 2030. We need to ensure that our mitigation efforts do not drive up costs for households, further worsening the global deficit of adequate and affordable housing.”

Many of those who cannot afford a decent place to live are more vulnerable to the effects of climate-related events because of their housing situation. Habitat is calling on leaders gathering at COP27 to guarantee that adaptation funds and plans address housing and its supporting infrastructure, ensuring that communities at greatest risk of flood, heat and rising seas can withstand the impacts of such disasters.

Suffering damage to one’s home – or losing it altogether – has economic, social, health and livelihood impacts that result in long recovery times and frequent displacement, which makes such losses one of the greatest destabilizing factors from increasingly severe climate events. Robust commitments to confront this “loss and damage” as a matter of climate justice, must be an outcome at COP27, Canagasingham said.

Habitat has dozens of projects around the world that involve climate change mitigation and/or adaptation, such as building climate-resilient homes in Sri Lanka and tackling energy inefficiency in Eastern Europe through renovations, upgrading and retrofitting of multi-apartment buildings. In recent years, Habitat has increasingly worked with families and communities to recover and rebuild their homes to be resilient to natural disasters, e.g., the bushfires in Australia and the United States; typhoons in Southeast Asia; floods in South Asia; and hurricanes in the Americas.

By ensuring empowered participation of all affected communities in developing mitigation and adaptation plans, Habitat is spreading awareness and consolidating green concepts, showing their importance, and helping leaders understand the scope of impact on societal health, economy, and environmental wellbeing in the short- and long-term.

Driven by the vision that everyone needs a decent place to live, Habitat for Humanity began in 1976 as a grassroots effort on a community farm in southern Georgia. The Christian housing organization has since grown to become a leading global nonprofit working in local communities across all 50 states in the U.S. and in more than 70 countries. Families and individuals in need of a hand partner up with Habitat for Humanity to build or improve a place they can call home. Habitat homeowners help build their own homes alongside volunteers and pay an affordable mortgage. Through financial support, volunteering or adding a voice to support affordable housing, everyone can help families achieve the strength, stability and self-reliance they need to build better lives for themselves. Through shelter, we empower. To learn more, visit habitat.org. 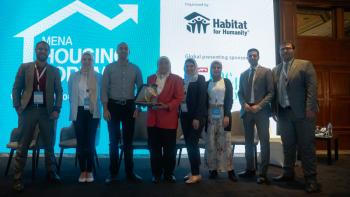 Housing for All Egyptians, by Social Housing and Mortgage Finance Fund from Egypt (Public Policies category), The Housing Monitor by Public Works Studio from Lebanon (Best Practices category) and Recyblock by Zelij Invent from Morocco (ShelterTech category), are the winners of the MENA Housing Forum Innovations Awards 2022. 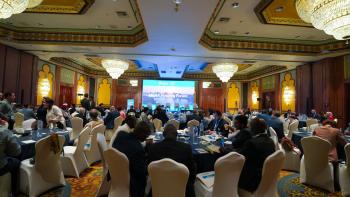 The first-ever Middle East and North Africa, or MENA, Housing Forum started today in Cairo, under the patronage of the Egyptian Ministry of Housing. Over the next three days, stakeholders will discuss ongoing housing challenges, including the persistence of informal settlements, the rise in refugee numbers, the increase of vulnerability in the wake of COVID-19, and the region’s role in climate action following the COP27 climate change conference. With 10 in-person and five virtual sessions scheduled, the hybrid forum is expected to attract over 500 participants. 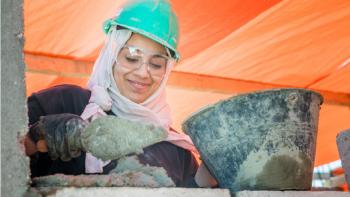 Cairo will host Habitat for Humanity’s first edition of the Middle East and North Africa (MENA) Housing Forum, November 21-23, 2022. The three-day event will convene housing contributors and stakeholders from the public and private sectors, advocates, academics, researchers, microfinance experts and representatives from local and international NGOS from the MENA region.