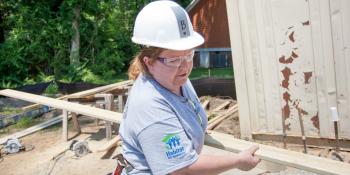 Building back stronger after Hurricane Sandy

Barbara had all but lost hope after Hurricane Sandy hit her beachfront town in central New Jersey in 2012, destroying her home and the family business and upending almost every aspect of life.

Barbara’s house, the one she grew up in, had survived other storms, but this time was different. She remembers watching “pieces of homes and things which once helped define our lives floating by.” A sidewall was ripped from the outside of the house, letting in the rain and snow.

“We were left with a lot of mold. You could actually taste it,” Barbara says. Her daughter, Harlea, began having serious health problems — her asthma flared up, as did skin and eye conditions, and she had to drop out of college. “It was just devastating to me as a parent, not being able to protect my child,” says Barbara. “I was at the breaking point.”

Then Barbara saw Habitat for Humanity in Monmouth County offering its services to hurricane-affected families. “I called the number, and they actually called back,” Barbara says. “I said, ‘I have an extremely little amount of hope left. If you can’t help me, it is kinder to tell me that.’ And they said, ‘We are going to be with you through this.’”

“We have a beautiful and safe place to rest our heads at night. Habitat rebuilt our home and healed our hearts.”

“We have a beautiful and safe place to rest our heads at night,” Barbara says. “Habitat rebuilt our home and healed our hearts.”