Communities and connections at the heart of Collegiate Challenge

Bob Brown has always had a calling to help others.

After retiring from the Air Force in 1991, he started volunteering with Sumter Habitat for Humanity in South Carolina. In 1995, he was hired as their construction manager, retiring in 2018 after 24 years of dedicated work.

Collegiate Challenge offers local Habitats the opportunity to engage with young, energetic volunteers who can help boost the work already being done in these communities. To best utilize the extra hands and energy, Habitat Sumter plans Collegiate Challenge’s work ahead of time and is able to expedite their typical building timeline.

“Collegiate Challenge is our anchor,” Bob says. At Habitat Sumter, these volunteers can construct the main structure of the house in just a few weeks, and once a house has already been started, it’s easier to get local volunteers involved.

Collegiate Challenge volunteers also encourage a productive working environment by keeping an enthusiastic and friendly attitude both on and off the build site.

“They’re ready to do anything that’s a help,” Bob says. “They really want to help people – it’s so refreshing.”

“Collegiate Challenge is our anchor.”

The volunteers quickly find ways to connect with homeowners they’re building alongside. The messages of positivity and hope that volunteers often leave on the lumber with which they build create a very special bond.

“It’s moving when you see a homeowner read what the college students have written – to see tears roll down their cheeks,” Bob says.

A Collegiate Challenge trip is about more than serving on the build site – it’s a community experience. Bob feels that the volunteers jump at the opportunity to immerse themselves in the community they’re working in.

Sharing meals together gives the volunteers a chance to interact with the community, so Bob tries to involve as many local people and restaurants as he can. He’s seen firsthand how sharing a table with others opens the door for new conversation and connections.

“One man in town owns multiple restaurants, and he always steps up and provides meals to Collegiate Challenge groups,” Bob says. “He makes a point to talk to them and tell them how much he appreciates their efforts.”

Habitat Sumter works hard to ensure the local community supports the visiting groups. “Young people have a lot of energy,” Bob says. “They want to see and do things.”

While volunteers leave behind a long-term impact on the communities they work in, they also take something along with them – a lasting connection with the people they meet.

Bob has had the privilege to work with the many of the same organizations and schools year after year. Students from Brock University in Ontario, Canada, have bonded with Bob over the past eight years, even introducing him to Facebook.

Thanks to social media, Bob feels as involved in Brock University’s community as they are in his. He’s been able to watch students graduate and begin careers as teachers and doctors, and he takes the opportunity to have dinner with former Collegiate Challenge volunteers when he can.

As he sits at his desk surrounded by the souvenirs that students have given him, he finds it easy to feel connected to all the volunteers he’s hosted over the years.

“Those are my memories,” he says. “They’re important to me.” 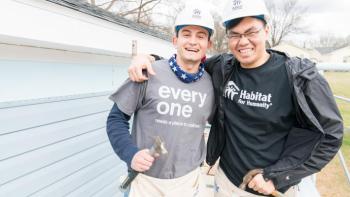 Join us as we celebrate 30 years of Collegiate Challenge and explore how this program has grown to engage over 260,000 volunteers.