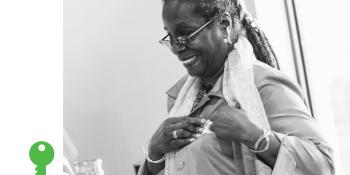 First in her family to own a home

This spring, Diane Chambers became the first member of her family within living memory to own her own home. Though it was a long time coming, it was still hard to believe. “It changes my life dramatically,” the retired school teacher says.

Previously, says Chambers, everyone in her family lived in big cities. “Homeownership was not something that anyone really did,” she recalls. “And it was something that not everyone could afford, of course.”

When she moved to New Jersey from New York City, where she taught high school in the Bronx, Chambers took a job at a local nonprofit, and that’s where she connected with Habitat Burlington County. “I would take young folks to volunteer, and I volunteered, too. But it never crossed my mind to look into a house for myself.”

Then she changed her mind. “I thought, ‘Just go ahead and apply.’ I never thought I’d be the first in my family, but I always wanted to own. ‘Make the possible out of the impossible,’ I like to say.”

The Habitat house, she says, has done just that. “I realized I didn’t have to depend on things outside myself anymore,” she says. “I had the tools to do whatever I wanted to.”

In a nice closing of the circle, Chambers says that at the dedication ceremony she noticed her sister looking closely at the house key. “She turned to me and said, ‘This has the same number as the place we grew up in.’ And she was right: 143. It’s almost like it was meant to be.”

One of Chambers’ favorite quotes is from the 13th century monk Nichiren: “If one lights a fire for others, one will light one’s own way.” It’s an idea she wants to pass along.

“One of the beautiful things about this is everybody who touched that house, all the volunteers, everybody whose heart went into helping build that home,” Chambers says. “It may be my home, but everyone else’s spirit is in there, too.”