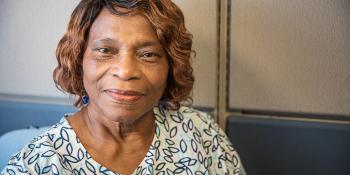 A common theme throughout Faustina Ward Osborn’s life has been her work to improve her community, in the U.S. and in her home country of Guyana.

Her resume includes work in gender equality issues, education, journalism and economic development. She also once served as a delegate to the United Nations General Assembly.

Faustina served as an AmeriCorps member with Habitat for Humanity in 2016, working to develop a program that helps homeowners stay in their homes as they age.

“When I came here and found it was a program they were designing, which is what I have been doing for years, I saw the correlation between aging in place and doing a gender equity program,” she says. “As people age, we are finding more and more single, older adult households. And most of those single people are women.”

Faustina saw the importance of community and how issues affected women, in particular, during her time in education.

“When I became a principal, I moved to a hinterland area, a mining community in the rainforest region of Guyana. It’s an isolated community,” she says. The men would sometimes travel to find employment, so much of the work in the community would be done by the women.

“When people get together, we can solve problems.”

Faustina says she worked to build up the community, drawing on the strength of the people available to accomplish things like building a school. So years later, when an opportunity to serve as a Habitat AmeriCorps member arose, she drew on her experience in organizing the community to better itself.

“When people get together, we can solve problems,” she says.

Faustina saw how people get together during Habitat’s annual AmeriCorps Build-a-Thon event in Wake County, North Carolina. Her first year of service made such an impact that Faustina decided to serve a second year with Habitat AmeriCorps.

She recalls how one of the homeowners she built alongside was so touched by “the fact that people would come from all over to build a home for her and her children. People who did not know her, were willing to come and do that for her.”

“We need more of this kind of action in the world,” she says.

You can learn more about Habitat AmeriCorps and apply today!