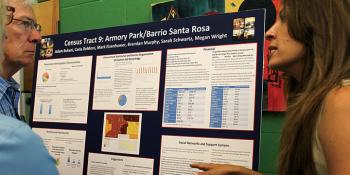 The 2015 Tucson Well-being Survey, a collaboration between the University of Arizona and Habitat Tucson, examines the challenges faced by lower-income families in Arizona’s second-largest city.

Among the report’s findings:

Habitat has pledged three years of support for the survey project, Mayer says. Student researchers will revisit the families surveyed, tracking their progress and documenting any difficulties. “Understanding these challenges is a regional priority for the city and its nonprofit community,” Mayer says.

The study was presented in May to the mayor of Tucson and over 100 other city officials and community members.