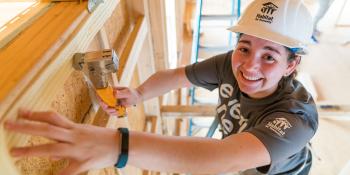 Is a gap year right for you?

When students decide to take time off between high school and college, or at any point during their college years, their break from the classroom can be a time of exploration and growth.

For many students, the idea of taking a “gap year” has a lot of appeal. Americangap.org defines a gap year as an “experiential semester or year … typically taken between high school and college in order to deepen practical, professional, and personal awareness.” While some students might elect to backpack through a foreign country, others might seek out ways to put their passion for serving others into practice.

For students interested in helping families and communities who are building and improving places to live, Habitat for Humanity offers multiple gap year opportunities. For example:

“The most beneficial aspect would be learning how to work together with all sorts of people.”

The AmeriCorps program ended up being just what Joe Morvillo was looking for when he decided to take a break between earning his undergraduate degree and starting medical school. While in college, Joe had volunteered with Habitat Capital District in Albany, New York, and was excited to spend a year as an AmeriCorps there leading construction crews.

“A year of doing that sounded pretty awesome to me,” Joe says. He passed on an opportunity to take a more lucrative job, confident that he would enjoy the year with AmeriCorps. “And I did, so I’m glad I did it.”

Now that Joe has started his first year of medical school at New York Institute of Technology College of Osteopathic Medicine, he can see the benefits of his decision. “I don’t think a gap year helped or hurt my academics,” he says, “but I know as far as the emotional/psychological part of it, taking a gap year away from all the stress of med school was definitely a good way to kind of mentally restart, clear the mind and get ready for something new.”

He also carries with him a very valuable lesson that he learned from his AmeriCorps experience working with volunteers. “The most beneficial aspect would be learning how to work together with all sorts of people,” he says.

“A year with Habitat gave me a much healthier and more mature view of the world. It was a really transformative, inspiring thing for me.”

For many like Joe, spending a gap year with Habitat helping families achieve stability and independence instills lessons that stay with them — even decades later. Cory Mason spent a year building with Coastal Empire Habitat in Savannah, Georgia.

Cory says his time with Habitat fit his mission to do something meaningful after high school and before starting college. He liked that the work was focused on “not just how to build a house, but how to build a community.”

In the short term, the gap year helped Cory heading into college. “I was maybe better prepared than a lot of my peers,” he says. “I think I did better academically.”

In the long run, his year with Habitat proved instrumental in Cory’s decision to be a public servant. He currently is a state representative in Wisconsin.

“It was one of the formative things that inspired me to pursue public office,” he says. “One of the things that stuck with me about Habitat was its desire to empower people.

“A year with Habitat gave me a much healthier and more mature view of the world,” he says. “It was a really transformative, inspiring thing for me.”

Learn more about opportunities to become involved with Habitat. Find your fit today!