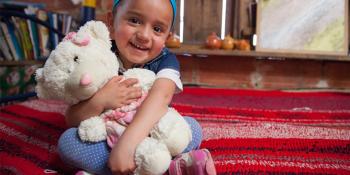 New life for the Aldana family in Colombia

Three-year-old Ana Maria Aldana had news she could not wait to share with just about anyone she came across.

As soon as her mother partnered with Habitat Colombia to renovate their existing one-room home — and then make incremental improvements and additions over time — young Ana Maria wanted everyone to know that the family now had a bathroom and a shower.

“I know it’s illogical that a girl would say we have a bathroom since it’s normal for everyone to have a bathroom,” says her mom Monica, a teacher in Soacha. “My little baby would tell the neighbors, and people would just look at her. But how was she going to know that was normal? We didn’t have one.”

Monica describes their pre-Habitat living conditions as terrible. The family of six lived in the crowded one-room structure that they were trying to build themselves, with no ventilation and no bathroom or kitchen. The Aldanas were not alone — nearly one-third of Colombian households do not have adequate housing.

“Truth is, we were really in a bad way,” she says. “I felt very frustrated because I could not give them what I knew I had to give them as a mom. I used to cry a lot.”

Then, her partnership with Habitat addressed those immediate needs and also resulted in an improved concrete floor and plans for a second stage of building.

“For the children, it is a very big change,” Monica says. “Before, they would tell me they were ashamed that their friends would find out where they lived. Now, they invite them over.

“What Habitat did was not only put up walls, but put up hope,” she continues. “They put life into my home.”