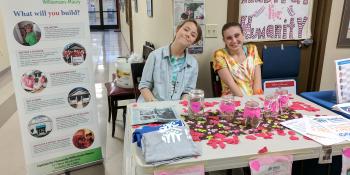 A penny and a prayer

If you wonder how far you can get these days on a penny and a prayer, Cameron Cox can tell you. Really, really far.

The 14-year-old launched a campaign called “A Penny and A Prayer” to support families partnering with Habitat in her hometown of Spring Hill, Tennessee. After asking her school friends to donate their pennies (and quarters, dimes and nickels), Cameron’s campaign caught fire and raised almost $3,800 in two months. A second-grader even sold her Easter candy and contributed $37.

From the outset, Cameron decided that the fundraiser needed to be about more than money. She made the rounds to local establishments with two sets of mason jars — one to collect loose change, the other to collect prayers and good wishes for families partnering with Habitat. Hundreds of people took the time to write heartfelt messages on little pieces of paper.

Some of the most touching are from children, including one who expresses hope that Santa will fit down the new chimney being built. Construction also is on the mind of a 9-year-old who drew a pencil rendition of a simple but beautiful house, much like the ones Habitat builds, with this accompanying message, “I hope everything works right.” Then there is this prayer with a distinctly Southern bent: “I pray that y’all have a safe time building your house and that when y’all move in, that y’all will make a lot of memories.”

Cameron believes she knows why the campaign touched so many kids and grownups alike. “I think people, deep down, want to make a difference,” she says. “I think that giving sparks a little bit of hope in them.” It’s also clear that Cameron herself has inspired many folks in Spring Hill, including a developer who wrote a check for $500 and told her to listen to God’s voice and always do the right thing. “I do feel like God told me to do this, and I listened,” Cameron says. “I accepted God’s challenge.”

“A Penny and A Prayer” was definitely a challenge, Cameron says, bigger than she ever thought. She originally wanted to volunteer with Habitat for Humanity Williamson-Maury building houses, but isn’t quite old enough yet to work on a build site. “I am in a very blessed environment,” she says. “I have a home and a very loving family. I know there are people out there who don’t have stable homes.”

The idea to hold a fundraiser dawned on Cameron as she was walking through a store and saw someone drop some change. By the time she picked it up to return it, the person was gone. “I began to realize there was loose change everywhere,” she says. “And I thought, if I had a penny for every prayer that is said, that would make a huge difference. That’s how I came up with the idea of ‘A Penny and A Prayer.’”

Cameron knew that she would have to get out of her comfort zone to make her idea succeed. She is an introvert. “I always had trouble talking to people, and I would never go up to a stranger and start a conversation.” After clocking more than 100 volunteer hours and earning the President’s Volunteer Service Award, Cameron no longer has trouble chatting people up — or asking them for money. “This has helped me more than any speech class,” she laughs.

The campaign started out at Heritage Homeschool where Cameron asked her fellow classmates during chapel to help by giving pennies and prayers. She set up a table with pink and red hearts and mason jars. The first donation came from a friend, who pitched in $5. In no time, Cameron had raised $250.

“I thought, ‘This is just from the people I know.’ There are a lot of people I don’t know who could give.” Enlisting help from some of her friends, Cameron got permission from fast-food restaurants, the skating rink and other local businesses to hold fundraisers. Some of the businesses also donated a percentage of their sales to Cameron’s efforts.

Those efforts have garnered Cameron widespread recognition, including an award from Tennessee’s governor and Spring Hill’s mayor, both of whom she hit up for a contribution. “Before, when I got awards, I was like, ‘Look at me,’” she says. “Now I don’t care if I get them or not. This is really about helping people.”

And she has. The $3,800 raised through “A Penny and A Prayer” went toward the construction of three new Habitat homes. Cameron also is a great ambassador for her local Habitat and is gearing up to repeat the campaign in the fall. “We were blown away by Cameron’s initiative and hard work,” says Jennee Galland, director of communications and events for Habitat Williamson-Maury. “Fundraising is never an easy task, but she rose above her fears and became a voice for Habitat’s mission in our community. Cameron is a prime example of what we can do together when every hand does what it can.”

A few weeks ago, Cameron attended the house dedications of the Habitat families whose homes she helped build. She presented them with the messages and prayers, including this one from an 11-year-old who connected with a family she did not know. “So happy for you and your new blessing. Hope your life will be smooth. Jesus loves you and so do I.”