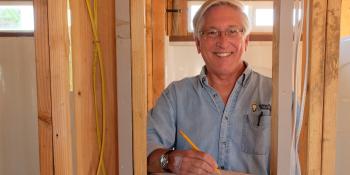 The power of volunteering

On his first day as a volunteer with Habitat for Humanity of Greater Sacramento, sometime in the mid-1980s, Cliff Popejoy, an air quality scientist, was presented with a choice: help insulate the home or wire it. Despite his limited electrical experience, he opted to give the electricians a hand. Although seemingly simple at the time, that decision would go on to change the trajectory of Cliff’s life in ways he couldn’t have imagined.

In the weeks to come, Cliff became a regular on the all-volunteer electrical crew — a group dedicated to completing the electrical work on every new and renovated Habitat Greater Sacramento home. Under the mentorship of the crew’s leader, he spent most Saturdays running, splicing and connecting wires to power Habitat homes. “There were about a dozen of us,” he says of that first cohort. “We were constantly learning and improving. And Bill, our leader, he led our band of amateurs valiantly.”

After working side by side for several years, when Bill needed to step down, he asked Cliff if he would take on the role of crew leader. Cliff, honored by the request and encouraged by his crewmates, humbly accepted. “I will do you proud,” he promised Bill.

For next 20 years, Cliff has held tight to that promise. “In the beginning, I studied and studied while looking for ways I could get more expertise and experience in the field,” he says.

Over the decades, that mindset has led to new and unexpected opportunities. Opportunities like passing the electrical contractor exam and earning his license; leaving his long-held job as a scientist to open his own small business as a full-time electrician; becoming a nationally recognized expert in old home wiring; and writing and editing technical manuals, articles and books for tool companies, national publications and home renovation experts. All of these were accomplished while he continued to recruit, train and lead Habitat Greater Sacramento’s growing electrical crew.

Today, the crew boosts 25 active members and a total rotating rooster of 80. Crew members come from all different backgrounds and careers — including retired pharmacists, salespeople, veterans — and 40% are women. Cliff and his co-leader, Jim Campo, are working to involve more young people and people of color, helping them become skilled in an in-demand trade which could lead to career opportunities.

In his more than 30 years with Habitat — 10 as a crew member and 20 as crew leader — Cliff estimates he has helped complete the wiring on roughly 95% of all new Habitat Greater Sacramento homes — helping more than 160 families achieve their dream of homeownership.

“I started on this path simply because of joy I experienced while helping people, and that joy is what kept me going,” he says. “My favorite moment is when the parents show their kids the house for the first time. Their eyes are as big as saucers. I’ve witnessed it many times — this wonder and excitement,” he says, pausing as emotion catches in his throat. “But it never gets old.”

His and the crew’s work has saved the affiliate an estimated $600,000 over the years. The quality of the crew’s work and the energy efficiency of the homes has also helped reduce the cost of power for homeowners.

“I remember Sophie and Richard’s electric utility bill was $0,” Cliff says, of a family of five who partnered with Habitat to build their first permanent home. In the summer, their solar panels pump enough energy back into the grid to offset their household’s usage in an all-electric home.

“We’re building homes to last — and that includes affordability. A family averaging $0 in electrical costs over a year? It doesn’t get any better than that.”

At 68, Cliff doesn’t plan on slowing down any time soon. In fact, he says he has doubled down on living life to the fullest — a world view that puts giving to the fullest in the center. That commitment was reinforced after his first wife, Debora, an ardent champion of his work with Habitat, unexpectedly passed away in 2014.

“I’d always been an enthusiastic liver of life, but losing her was a wake-up call,” he says. “The universe was reminding me: Don’t miss an opportunity. And so here I am. Reporting for life.”

His leadership, encouragement  and commitment to the electrical crew and his work with future homeowners each represents life-affirming, can’t-miss opportunities for Cliff. And, after finding love again and remarrying, he’s experiencing them all with his wife, Antonia, who has joined as a crew member.

“Habitat gave me a way to engage with the community, but also to find some sort of meaning,” he says, looking back on why the decision to spend his weekends on Habitat construction sites for the last 30 years has been a relatively easy one.

“It’s a gift to give this love, this life, back in some small way,” Cliff says.

Learn more about
HFH of Greater Sacramento
Share this page on your: