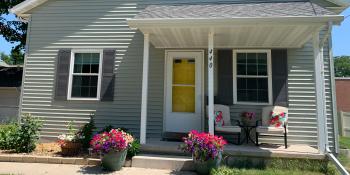 The power of Women Build

During the COVID-19 pandemic, our homes have become schools, offices, restaurants, playgrounds and so much more. Now more than ever, we’re all realizing that a home is more than a shelter. It’s our safety, our prescription for health, and it’s the foundation for the futures we build.

Another truth that COVID-19 has brought home is the tremendous balancing act that so many women have faced: working from home or serving as essential workers, all while often helping their children navigate virtual school and keeping their families healthy.

Habitat for Humanity has long recognized the critical role women play in their communities and their specific barriers to homeownership. That’s why Habitat’s Women Build program, thanks to the generous partnership of Lowe’s, brings together future homeowners and dedicated volunteers to help women build a better future for their families and communities. The Lowe’s partnership with Habitat began in 2003, and Habitat and Lowe’s help families across the U.S., and in India and Canada, build a brighter future through homeownership during International Women Build Week.

We invite you to meet four homeowners – Nilda, Christina, Ai and Yessica – and longtime volunteer Teri to learn more about the difference that Habitat, Lowe’s and homeownership have made in their lives.

Nilda wanted nothing more than to build a healthy home for her family. Air quality issues in her apartment were causing her daughter, Ariana, to have chronic asthma attacks. The family’s apartment was also invaded by roaches and mice that came in from the basement. Ariana was constantly in the hospital, and the medical bills were piling up. “Every time I saw a roach or mice or something like that, it would just drive me crazy,” Nilda says. She tried everything to keep the pests away, but nothing worked.

Christina and her husband, Joe, wanted a healthy home for their family, too. Mushrooms were growing in the ceiling of their rental home, and it was making their eldest children Joseph and Jozlyn sick. The family moved often, and it wasn’t the first time they found themselves living in an unhealthy home with issues like black mold.

Both Nilda and Christina knew having a safe and decent home would significantly improve their children’s health. Both women found their solution in Habitat.

Nilda reached out to New York’s Habitat Greater Newburgh and applied to become a homeowner. Although her first two applications weren’t approved, she worked diligently with support from Habitat to improve her finances. Her third application was approved, and Nilda found herself on the path to homeownership.

Once Nilda and Ariana moved into their new home three years ago, Ariana’s asthma attacks stopped completely. “There were so many things that I had to do to be able to keep my house safe that I no longer have to do,” Nilda says. “It took away so many worries that I had, owning my own house.”

Eleven years ago, Christina contacted Rogue Valley Habitat in Oregon. While her home was under construction, she attended a how-to clinic at the local Lowe’s store to learn construction basics. Later, employees from the store’s volunteer program, known nationally as Lowe’s Heroes, showed up at the Women Build event at her home to help her paint. She says when they arrived it was like “seeing old friends.”

Since moving into their Habitat home, Christina’s kids Joseph and Jozlyn have thrived and enjoy good health, which has allowed them the energy to focus on their studies. Joseph was valedictorian of his high school last year. “My kids don’t have to move around anymore,” says Christina. “There’s nothing in this house that’s going to make them sick. I know that they will reach their full potential by us having this house.”

Enough to save and invest

Yessica knew paying an affordable mortgage was the key to being able to provide a stable home for her daughters, Lourdes and Yaritza. They lived in a small trailer in an unsafe neighborhood in southeastern North Carolina. Yessica grew afraid for her family’s safety when there was a homicide nearby. She reached out to Habitat Goldsboro-Wayne to learn more about their homeownership program and applied.

“Before Habitat, I felt insecure,” Yessica says. “Insecure about not having enough money for the month to pay bills or to buy groceries.” In her new home, Yessica’s mortgage payment is less than what she once paid for rent, and not having to worry about being able to pay her bills has allowed her to focus on her career goals. She’s working toward obtaining certifications for her job as a CNC machinist and plans to get her associate degree next.

Like Yessica, Ai was able to invest in her education after moving into her Habitat home. “I remember at one time, all I wanted was a Habitat house for my kids,” Ai says. “I wanted a house where each of my kids would get their own room and a mortgage I could pay for.” That was eight years ago, when Ai and her two children were sharing a bedroom in her parents’ Wisconsin home.

The newly single mom had made the tough choice to move back in with her parents while she finished her college education. “Those years were really hard,” Ai says, but she believed getting her bachelor’s degree would pay off.

Living in her Habitat home, the elementary school teacher has been able to go back to school and obtain her master’s degree in education. Having an affordable mortgage also allowed her to spend more quality time with her children because she didn’t have to worry about making ends meet every month to pay for her home. “I don’t think I would have been able to be the mom that I am now if I didn’t go through the Habitat program,” she says.

A safe place to shelter

As a registered nurse, Nilda knows that having a safe and decent home plays a critical role in keeping families healthy during the COVID-19 pandemic. She’s grateful to have a home where her family can spread out now that so much of their time is spent inside. “My children have their own space,” she says.

Even with taking every precaution, her son, Alexander, tested positive for COVID-19 earlier this year. Nilda quarantined him in the basement while her daughter, Ariana, stayed in her bedroom on the home’s second floor. “That was a scary moment. We were able to handle it well,” she says. “The house gave us that ability to maintain my son in a space where he was OK. He was isolated, but he didn’t feel like he was closed in.”

During the pandemic, Ai’s home has become a classroom. Brightly colored papers with messages like, “Be kind. Be respectful. Be safe,” hang on her walls. She teaches kindergarten and first graders via a video conferencing platform while Angel and Kong attend college and high school virtually upstairs. Her youngest son, 4-year-old Bruce, bounds around the house visiting his family. “It’s been a safe haven for us, and we’ve been healthy,” Ai says of her home.

When Ai reflects on her journey to homeownership, she remembers one of her proudest moments working alongside volunteers to build her home during a Greater Fox Cities Area Habitat Women Build event. “I remember standing there, and I’m just looking at my house, looking at all the women that were working on it,” she says. “I felt so blessed to have all these people helping my kids and I get this house. That was a very happy moment for me.”

Working side by side

Yessica says it felt empowering to work with Women Build volunteers to raise the walls of her home. “I felt proud there were only women working that day because it shows that we can do it,” she says. “We’re capable of doing everything.”

Teri, a volunteer crew leader with Habitat Greater Los Angeles, agrees. Teri has volunteered for 12 years and enjoys seeing Women Build volunteers let loose and have fun while helping others.

As a crew leader, Teri greets volunteers and explains what jobs they’ll do to contribute to construction. “We explain how to hammer or drill a nail, but some people are afraid of certain things,” she says. That’s when Teri steps in to help. She encourages volunteers to give something new a try, and if they aren’t comfortable, she’s always happy to help them find something they love.

Nilda, Christina, Ai and Yessica were all motivated by the same dream: having a home where their children could be healthy and safe and would thrive. They wanted to nurture their own goals, too, like going back to school and furthering their careers. By building a safe and affordable Habitat home, these women also have built a strong foundation to help them make their dreams a reality, and that’s exactly why Habitat and Lowe’s continue to work together toward our shared vision of a world where everyone has a safe and decent place to live.

Learn more about Women Build and International Women Build Week and find out how you can participate.

Learn more about
Women Build
Share this page on your: