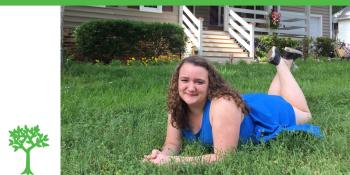 Putting down roots in a Habitat house

Samantha is 13 years old and has lived in 13 different places. This last one, she says, is going to stick.

“This house just feels different,” says Samantha, a rising eighth-grader. “I know I am not going anywhere. And that feels good.”

What also feels good is practicing cheerleading moves in her very own front yard, hanging photos on her very own bedroom walls and being able to draw pictures of her very own house. “I love to draw,” Samantha says. “The coolest thing about this house? I’m going with the fireplace.”

This past November, Samantha, her 7-year-old sister Elizabeth and their parents, Patrick and Christine, moved into a Richmond Metropolitan Habitat for Humanity home.

Many of the moves in Samantha’s life followed her father, an infantryman in the U.S. Army. More recently, the family found itself relying on friends and transitional housing shelters for places to live after Samantha’s dad, who fought on the frontlines during multiple tours in Iraq and Afghanistan, began suffering from severe PTSD. “I was very anxious then,” Samantha says.

Samantha has lost track of exactly how many different schools she has attended over her lifetime. She counts at least 10, three in middle school alone. There are some years when she wasn’t enrolled long enough to even get a report card and often had to play catch-up academically. Making new friends at each new school was the hardest, she says. Leaving them was next. “It was always hard saying good-bye.”

After Samantha’s dad took a medical retirement from the Army in 2013, the family applied to various programs for disabled soldiers but never heard anything. Then they applied to Richmond Metropolitan Habitat after reading about its veterans’ homeownership program. After they were accepted, the family, their neighbors, Habitat volunteers and staff rehabbed and renovated a house, which had sat empty for years.

The home was dedicated on Nov. 11, 2014, Veterans Day. “It is nice to know that we have stability,” says Samantha’s mom, Christine, who calls the house the family’s “forever home.”

Samantha remembers when she first realized that she finally had a place to call home. “It was the first night sleeping in the house with all of my furniture,” she says. “It hit me. This is my room. And I won’t have to pack it.”

Every donation makes a difference.