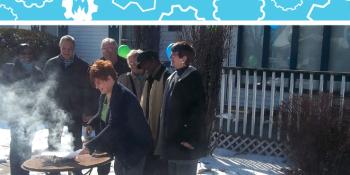 Time to build, time to weep, time to laugh

Some moments seem to slow down enough to allow a person to be fully present in them, to take in everything that’s happening and to understand their greater meaning. Rebecca Jackson-Sanchez experienced such a moment one Sunday in late February, when she burned the mortgage of her Northwest Indiana Habitat for Humanity home.

But when the time came to light the fire, she says, “this overwhelming feeling came over me. And I said I wouldn’t, but I actually started to cry. I just felt so, so important because I’d paid this mortgage off last year, and Habitat is still around me, helping me celebrate this moment.”

Jackson-Sanchez also recognized that moment as a transition from a time when she needed help to a time when she could provide it. Recently appointed to Northwest Indiana Habitat’s board of directors, she’s excited to experience the Habitat process from the other side. “I just have a burning passion to do this,” she says. “I would like to give back to Habitat as a thank you for what they’ve done for me and my family.”

The flames in her family’s past were much less celebratory than a Habitat mortgage burning. Northwest Indiana Habitat board member Rosanna Fowler remembers making the initial visit to the apartment Jackson-Sanchez shared with her three young children. The apartment was small and the ceiling was falling in, but “most of all, I remember that she had only one entrance to her place, and in order to get in or out you had to go by an open, exposed flame from the heating unit,” Fowler says. “What a danger it was for all of them.”

Now, to access Jackson-Sanchez’s front door, one must only pass by her favorite part of the house, the living room. A large window fills the room with natural light “I can open up my blinds, and all the light comes in,” she says. “I love this room. It’s a nice big room, and a big, big beautiful window.”

Outside of that big, beautiful window is where she stood in her yard, setting her mortgage aflame, fully present in a moment that combined past, present and future. She calls her Habitat home a true godsend. “It’s changed my life in such an awesome way,” she says, tearing up. “It has just meant the world to me. Every day I when wake up in this house and I sit in the back warming up my car or I sit in the front or I’m shoveling a sidewalk, I just look up at it and sometimes still can’t believe that I own this. This is mine!”