Habitat for Humanity in Cambodia

While poverty has decreased significantly, many Cambodian families are hovering just above the poverty line of US$1.25 a day. Nearly three quarters of the population still live on less than US$3 a day, based on World Bank’s data. Poverty is largely concentrated in the rural areas though urban poverty is on the rise. Habitat for Humanity Cambodia seeks to break the cycle of poverty through safe, durable, affordable housing solutions. Since 2003, Habitat Cambodia has enabled over 22,000 families to build strength, stability and self-reliance through shelter.

Driven by garment exports and tourism, Cambodia’s economy is among the fastest growing in the world. Having reached lower middle-income status in 2015, it aspires to be an upper middle-income country by 2030. Poverty has continued to fall with the official rate estimated at 13.5% of the population in 2014. A large majority of the poor live in rural areas. About 4.5 million people are vulnerable to falling back into poverty when exposed to economic and other external shocks. Two in three Cambodians are in need of decent, affordable housing. Cambodia needs to build an additional 1 million homes by 2030 in order to meet the demands of a booming population, according to the government.

How Habitat addresses the need in Cambodia

Habitat for Humanity Cambodia works with a diverse group of international and local non-governmental organizations, micro-finance institutions, corporate partners, and local and national authorities. Its holistic approach to housing includes:

Housing for the most vulnerable groups

For 15 years, Habitat Cambodia has worked in Phnom Penh, Siem Reap and Battambang to provide holistic housing solutions and secure land tenure for vulnerable groups such as informal settlers, those living with AIDS or disabilities, older persons and orphans. As part of a community-led total sanitation program in Siem Reap, implemented in 2014, water and sanitation facilities were built along with the promotion of behavioral change. In Battambang, Habitat Cambodia works with the local and provincial governments to provide secure land tenure and housing for informal settlers living on state land.

Habitat Cambodia engages young people in building homes and communities, speaking out for decent shelter, and raising funds and awareness of the need for better and decent housing in Cambodia. Annually, more than 1,200 Cambodian volunteers partner with future homeowners to build their homes.

In both rural and urban areas, local community members are trained to better prepare for disasters under the community-led Participatory Approach for Safe Shelter Awareness. Habitat Cambodia also responds to disasters through the distribution of emergency shelter kits and by building back better.

Since 2012, more than 66,000 families have gained access to housing finance loans through Habitat Cambodia’s partnerships with major microfinance institutions such as Kredit, LOLC (Cambodia) plc., First Finance, Sovannaphoum, and Hattha Kaksekar Limited. These MFI partners have also been provided with grants, initially through the Swiss Capacity Development Fund, to build their capacity and develop their products. 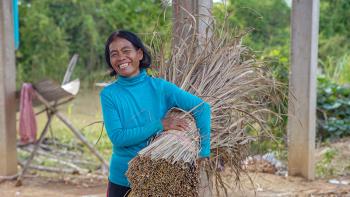 Marking the International Women’s Day, we share stories of women’s efforts to create a better and more sustainable future through home and land ownership, entrepreneurship and volunteering. 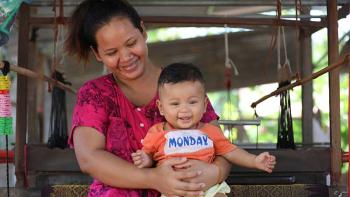 Senghouch’s relationship with her husband has improved after they moved into a spacious home where she can continue her weaving livelihood. What is more, her children are healthier. 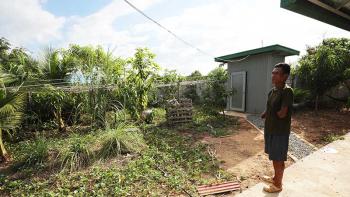 Free from the fear of eviction, Bunthoeun and his wife feel  secure in their own home. 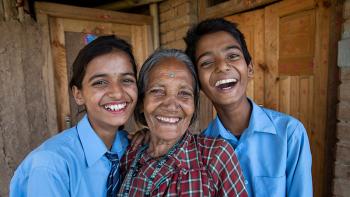