The housing need in Haiti

Haiti is the poorest country in the Western Hemisphere, with 58.5% of the population living on less than US$2.42 per day. Political instability, food shortages, unemployment, natural disasters and a lack of basic infrastructure have kept most Haitians locked in a cycle of poverty for generations. Access to housing is equally desperate. Before the 2010 earthquake, Haiti already faced a severe shortage of houses.

The earthquake damaged nearly 190,000 houses and 105,000 more were destroyed, adding to the pre-existing backlog of 300,000 houses required to meet the growing shelter needs of the country. Combined with Hurricane Matthew that directly hit the southern area in 2016, the housing needs have dramatically increased.

Simon-Pelé is a densely populated informal set of five communities of approximately 30,000 residents north of downtown Port-au-Prince. The area is characterized by low-quality, self-built housing, inadequate public infrastructure, high unemployment and violence. Despite the challenges, there are strengths, including strong social ties, human capital, a vibrant commercial main street and de facto security of tenure. Habitat is working on a water, sanitation and hygiene, or WASH, project to improve drainage, water, sanitation and resident hygiene practices. Through this program, Habitat has built latrines and handwashing stations in schools and individuals have been sensitized to proper hygiene practices.

Category 4 Hurricane Matthew violently struck southwestern Haiti on October 4, 2016, bringing heavy rainfall in the south, southeast and the northwest and creating the largest humanitarian emergency in the country since the 2010 earthquake. The hurricane caused considerable damage to the housing sector. Through the response program, severely damaged houses have been repaired and new homes have been constructed. Habitat  also responded to the earthquake which struck the northwest of Haiti on October 6, 2018, through home building and construction training.

Habitat is committed to training masons in the region to improve local, construction techniques and reduce vulnerability to disasters.

Major barriers to land tenure in Haiti include lack of official land documentation, low exchange value of lands, and a lack of an efficient land information system. In early 2019, Habitat Haiti launched a program in partnership with USAID aimed at proving tenure security to households in three municipalities and increasing the number of parcels registered in the land administration systems.

Five years later, Habitat for Humanity has helped more than 55,300 families affected by the Haiti earthquake

Habitat for Humanity has helped more than 55,300 families affected by the Haiti earthquake 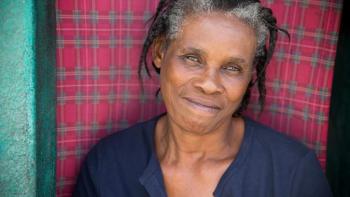 Haiti: We have come so far

Marie Gemma Donai is one of more than 50,000 families served through Habitat’s disaster recovery work since the devastating 2010 earthquake in Haiti.