Habitat for Humanity in Myanmar

Habitat for Humanity’s involvement in Myanmar arose after the devastating Cyclone Nargis struck on May 2, 2008. Together with its partner World Concern, Habitat  for  Humanity  built  and repaired more than 1,700 core houses in the worst-hit Ayeyarwady delta as part of World Concern’s integrated multi- sector disaster recovery program. In January 2014, Habitat for Humanity began projects in water and sanitation with disaster risk reduction with World Concern.

The housing need in Myanmar

Inadequate access to basic necessities of life such as shelter, water and sanitation defines poverty housing in Myanmar, especially in slum areas and the rural villages. Despite average annual economic growth of 7% during 2011-2017, one in three people continues to live below the national poverty line. The population and housing census in 2014 showed that close to 81% of housing units were made of wood and bamboo and were not durable. About 28% of households obtained their drinking water from unsafe sources and nearly 14% did not have a toilet. Habitat for Humanity started working through partners in Myanmar after the devastating Cyclone Nargis in 2008. The office in Yangon opened in 2014 and direct project implementation began in 2016.

How Habitat addresses the need in Myanmar

In Myanmar, Habitat contributes to the development of low-income communities by partnering with families to build decent shelter and increasing access to water and improved sanitation at the household and community levels. Habitat partners with the Department of Rural Development and Yangon City Development Committee and works directly with local and school committees in project delivery. The use of locally available and sustainable construction materials such as treated bamboo is promoted. Construction is complemented by on-site training in house construction and maintenance. Habitat also raises awareness of proper sanitation and hygiene in schools and in local communities.

Since February 2017, Habitat has hosted more than 500 international volunteers under the Global Village program in Bago region, north of Yangon. As part of the Habitat Young Leaders Build campaign, the Asia Build held in 2018 and 2019 saw a total of about 120 volunteers from Japan and Hong Kong building homes together with families. The Young Leaders Build engages young people to volunteer, fundraise and raise their voices on the need for safe, affordable housing. Habitat also promotes local volunteerism in its community development projects in Bago and Yangon. 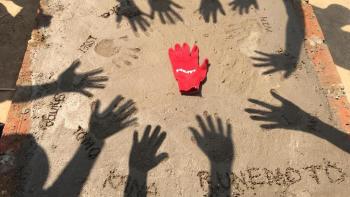 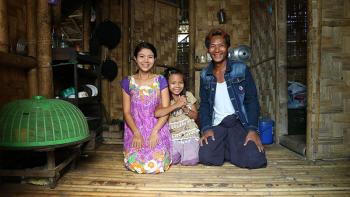 Bok Bok’s family feels safe, happy and healthier in a home that they built with Habitat Myanmar. 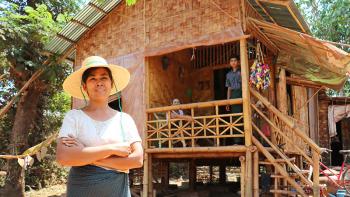 Frequent house repairs are a thing of the past since Myint Myint Sein and her family moved into their bamboo home.