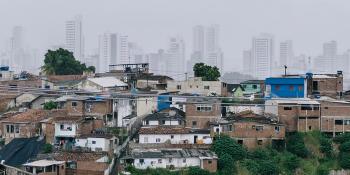 The biggest mistake of cities is their reactive planning

interview with the World Bank expert

If you know that people in your country are moving from villages to cities, think thoroughly about what kind of city you will need, an experienced urbanist advises. As a manager at the World Bank, Anna Wellenstein works with city representatives across the world on their planning so that it can proactively deal with global challenges.

Anna Wellenstein is a Director of Strategy and Operations for Social, Urban, Rural and Resilience Global Practice at the World Bank. As a member of senior management, she establishes strategies for analysis and funding in areas such as disaster risk reduction, urban renewal and geo-spatial technology.

You have more than 20 years of experience in urban planning and urban development. As a part of senior management at the World Bank, you are also responsible for lending to developing countries in more than 200 projects and 325 studies, monitoring a budget of over $25 billion today. What trends do you see on the global level in urban planning?

In the World Bank we are watching several megatrends, but three of them are the most important. The first one is climate change, which is now our reality. We see how climate change affects us, we tackle the risk of disasters and, in many parts of the world, we see their intensification. Nearly 100 million people are expected to be below the poverty line by 2030 due to climate change. The importance of predicting climate change is therefore the focus of leaders in all regions now.

The second trend is complex urbanization changes in connection with urban life. When I was just starting to work in this industry, there was significant discussion as to whether the rural or urban areas were more important. Now we have a much smoother and more effective view. Cities are an important opportunity from the perspective of development. If cities are managed well, businesses grow, people have better access to services and job opportunities are boosted. We know that 55% of the world population lives in cities and it is expected that this trend will continue for another 20-25 years. The number of people living in cities will increase by one and a half - to 6 billion by 2045.

The third trend is instability. We see that the fears and the impact of instability and violence are much more striking in many parts of the world.The issue of instability is also largely interconnected with migrants whose departure from their place of origin is caused by climate change, natural disasters, poverty problems and land issues. By 2030, we assume that the global proportion of the poor in unstable areas of conflict will be nearly 50 percent.

One of the things we consider to be really damaging is growing cities which are inefficient in planning, end up only informally absorbing the incoming population.

Are the cities and especially the growing cities reacting to these megatrends fast enough?

Sufficient speed is a relative term. Each country deals with its own political or economic challenges, but some important achievements are emerging throughout the world. We see that there has been a lot of progress in land management in Europe in particular: statutory claims have been registered, real estate systems are in operation, and transactions are happening faster and more efficiently.

Development aid, provided by the Union as a whole or by the countries themselves, also seeks to react to these trends. It is also gradually trying to balance the aid for cities and the aid for rural areas, where it was originally focused. Is this approach balanced, from the point of view of the World Bank?

When looking for sustainable development in cities, communities, or provinces, each part of the country plays a role in development. Most developed countries are more urbanized and more rural people are moving to cities. We therefore have to invest in urban areas as they will grow. But we also need to invest in rural areas where we need to provide services that help people to be healthy, educated and sufficiently involved in economic activities. As soon as the time comes and they  look for better jobs in cities, they will come already healthy, educated and trained. It’s not a question of investing only in cities or only in rural areas. There is a need to invest in the right things in every area that would support the poverty reduction and growth in the best possible way.

International development aid plays a role in all parts of a country, and I think that the “one or the other” strategy is more damaging than helpful. At the World Bank, we have shifted from this dichotomy, and I think it’s much more effective for the countries.

Which are the most successful European examples of projects in which the World Bank focuses on urbanization?

In Bosnia and Herzegovina, where we invested, we see remarkable changes. For example, the real estate transaction time has changed, with the period of real estate transfer decreasing from a few months to five days.

We have been cooperating with the government for a long time in Kosovo. We are tracking the real estate and land registration system. The program we supported has helped record land use and land ownership for more than 182,000 people. Coverage of land administration services has expanded to 77 percent of the population.

We work with a wide range of technologies within our program. We are experimenting with the use of drones to map and register real estate in Tanzania, Kosovo and Indonesia. Countries can map real estate in real time, reduce their own costs, and speed up this work.

Another area with which we have experimented is the use of artificial intelligence to measure built-up areas and to create various regulations. We tried to do it in a few places such as Serbia or Vietnam.

Several projects that work with technologies are also at the community level. For example, in Madagascar we worked with local communities where groups of participants started to demark parcels. We used aerial images downloaded to tablets. Members of the community together go through each parcel, identify their borders, and map them directly to the images on the device.

We are constantly expanding and exploring this area. Although not all experiments with technology always work, enthusiasm includes real experimenting and finding common ground.

How do you rate cooperation with governments and city managers? Are they open to new ideas and experiments?

It is difficult to generalize, but many are enthusiastic. There are very few places where people reject such technologies. Everyone is looking for ways to do things faster, better and cheaper.

This is one of the areas where the World Bank is really trying to be a partner to governments. Technology is a tool, but governments still need to have a clear idea of what their goals are. They have to make sure that the technology is right for them and that it is in line with existing legal and regulatory structures.

In cities, it is important to recognize and understand the trends and forces that cause growth or shrinking.

So, do there also happen to be investments in technology that are inappropriate for the city?

It happens, though not often. For example, the aforementioned community project from Madagascar can be effectively managed and used by the local community. However super modern technology which we are talking about, for example, with the Government of Dubai, is probably not a model that would suit the rural community in Madagascar and vice versa.

The Bank can help governments contextualize what is right for them. There are many options among technologies. Our job is to advise governments, help them and assure that they have the capacities and legal and regulatory structures so that the technology will help them achieve the desired goal.

Apart from applying inappropriate technologies and techniques, what are the most common mistakes of countries, regions or cities in projects they want to implement or are already implementing with the help of the World Bank?

In cities, it is important to recognize and understand the trends and forces that cause growth or shrinking. It is also essential that things are planned and thought about. Simply speaking, that the urban planning is not being solved in a reactive manner.

If you know your country is urbanizing, think about what type of city you will need in the future to adapt to the population that is coming and to support it in order to do well. Questions need to be answered about what infrastructure and services will be needed, how to plan land use and how to work sufficiently with businesses so that the jobs and economic opportunities will keep pace with the people who come.

One of the things we consider to be really damaging is growing cities which are inefficient in planning, end up only informally absorbing the incoming population. When the city did not plan and did not provide space, for example, for the construction of flats for low-income or new neighborhoods, the new immigrants settle in inappropriate places.

In the very fragile zones of the city, slums and poor neighborhoods are created, struggling with frequent floods or landslides, for example. The city does not provide services and sufficient infrastructure, it suffers from overloading and pollution, and eventually gets stuck in a vicious circle. It is therefore extremely important for cities to think about where they are heading and how they work with key partners, different social groups or businesses.

When I meet really successful and innovative mayors, and mayors who understand the dynamics of their city, they mostly have a vision and work with all key electoral districts to achieve it. This is the most important part. At the World Bank, we work with local authorities so that they can move from reactive to proactive regimes. During my work, I have seen many major transformations that the cities have implemented.

Which cities do you consider examples of an efficient transformation?

There are many examples but one of the cities we worked on and that has undergone an important transformation is Medellin in Colombia. The city is situated in the middle of beautiful steep hills. It was an area of deep conflict, but its leaders have a real transformational vision. They work with local communities, strategically invest not only in physical but also in social change and even try to change the psyche of the whole city.

Of course, every city has its challenges, but today Medellin has a wonderful infrastructure, and the broader city structure also includes areas where the lowest-income population lives. They have made great progress in controlling the risks of natural disasters, and the city is prospering both economically and socially.