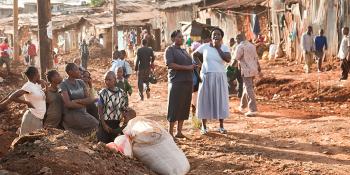 funded by the European Union

A need to step beyond technology while solving mass urbanization

Cities are being transformed by digital technologies, smart applications, robots, driverless cars etc. But do they also care to provide a quality life for everyone? Can smart technology also tackle mass urbanization and overcrowding?

Currently, 50 percent of the world`s population lives in cities and this number is growing at an unprecedented rate. In just 10 years, it is expected to increase by 10 percent. Cities face the challenge of absorbing new residents fast without further widening the existing social gaps between citizens.

Most Europeans have seen or experienced life in a ghetto or a rough suburb area around European capitals or urban centers. Moreover, the 2015 refugee crisis has put further pressure on big cities. Never before have Europeans felt the impact of issues behind their borders on their lives so intensely.

However, 95 percent of mass urbanization is happening in developing countries and the greatest actual pressure lies in the global south. Countries with the most relaxed migration policies, like Uganda or Jordan, are at a breaking point. Life in unplanned settlements, camps and slums poses a threat to well-being and health and additional risks of increased crime rates and violence.

In 2015, member states of the United Nations adopted a plan of action, Agenda 2030, to tackle the current global issues. It defines 17 Sustainable Development Goals and 169 targets. The national governments have committed to sustainable urban development under Goal 11: “Make cities and human settlements inclusive, safe, resilient and sustainable” and a target “ensure access for all to adequate, safe and affordable housing and basic services, and upgrade slums.”

While progress has been made, the world’s ability to meet the global urban population housing demand is currently outpaced by the rate of urbanization.

It may seem that the problem is beyond a solution. But a city itself can be the answer. Intelligent urban planning that reflects both the needs of the inhabitants and current critical problems could connect the best minds that the complex city network has. Each creative idea coming from an innovator, architect, nonprofit organization or government can be part of a common solution.

The city of Cane in Honduras serves as a good example of an effective housing policy created in partnership with nonprofits, citizens, community groups and private businesses. The well-thought-out, coordinated and executed strategy resulted in allocating resources that got distributed in number of ways. For instance, the city could acquire land, and through partnering with nonprofits such as Habitat Honduras, contract to build affordable homes, roads and water and sewage systems.

The idea of PPPP – Public, Private, People Partnership was applied within the Integrated Residential Development Programme in Pelican Park in Cape Town. Here in just four years, the city, a construction company and a nonprofit have built 3.200 homes for low-income families. The city of Cape Town Municipality and the Western Cape Provincial Government provided funding and land, the NGO Habitat for Humanity South Africa facilitated functioning of the local homeowners associations and the company Power Construction did the building.

In Chile in the 1970s, a professor, John F.C. Turner, teaching at a new masters program at MIT called “Urban Settlement Design In Developing Countries”, developed an idea surrounding the concept that people can build for themselves. Elemental, led by Alejandro Aravena, evolved this idea when commissioned to draw up a new master plan for Constitución, Chile, after it was hit by an earthquake. They provided the residents with just enough to meet the Chilean legal requirements for low-income housing, allowing them to expand the rest.

Let’s not turn a blind eye to mass urbanization and start shaping the way we live together. The cities of the future should not be just smart. They need to find a way how to include citizens, companies and institutions to participate in search of inclusive solutions and offer equal opportunities for everyone to live a decent life.

To further discuss global urbanization trends and how to ensure that housing needs are met for the growing populations in cities, Habitat for Humanity is organizing a panel discussion in partnership with Euractiv.sk called Urban Development: Building Cities for All. It will take place on May 23, 2018 at the Európske informačné centrum in Bratislava. The panel discussion is organized within the EU funded project Build Solid Ground.