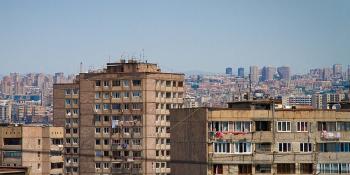 The project REELIH (Residential Energy Efficiency in Low-Income Households) started in 2012, in Armenia and Bosnia and Herzegovina. The aim of the USAID and Habitat for Humanity Europe, Middle East and Africa`s project is to tackle a common problem across countries in Central and Eastern Europe - energy inefficiency.

After the mass privatization in 1990s in the countries of Central and Eastern Europe, ownership of the multi-apartment buildings was transferred from the state to residents. As there were no prior communal maintenance arrangements, common areas in buildings, like roofs, stairs and facades, fell into disrepair.

Who can rely on REELIH?

Gohar Bayatyan and other 1,500 residents received renovation loans and support through the REELIH project. It helped insulate their homes, cut individual energy bills, and improved their building’s grim exterior. Read more about it in the story Makeover for Yerevan.

What have we achieved?

The continued success of the work in Armenia and Bosnia-Herzegovina is now inspiring further work in the region. Macedonia got involved in the second phase of the REELIH project which takes place from 2017 to 2019. It is funded by the United States Agency for International Development (USAID).

Webinar about the REELIH outcomes

On 13 February 2018, the LEDS-EEP organized the webinar Learning from Eastern Europe: An energy efficiency model to reduce energy poverty in residential buildings. Besim Nebiu and Zita Kakalejcikova, from Habitat for Humanity, introduced the processes and outcomes of the REELIH project. Watch the webinar:

Find out more about the project here:

This web site is made possible by the support of the American people through the United States Agency for International Development (USAID). The contents are the sole responsibility of the Habitat for Humanity Europe, Middle East and Africa and do not necessarily reflect the views of USAID or the United States Government.

Learn more about
Armenia
Share this page on your: