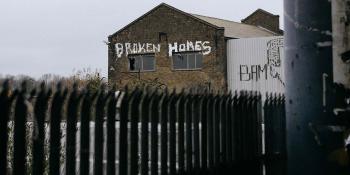 a tale from England’s housing crisis

Ryan Russell pokes his head into a small, warm room with clean white walls and a single bed next to the window. “Is this mine?” he asks. Outside, the rooftops of the affluent English town of Tunbridge Wells, 45 miles south of London, are washed
in pale winter sunlight.

The lanky 22-year-old sits on the bed, which suddenly looks too small for him, a big grin spreading across his face. Will his feet poke out of the end? “I’ll be fine, I’m only six foot five!” In the room across the corridor, Josh Chantler, who is 23 but seems older, stands by the window and looks quietly at the view.

For both men, who have been living at the YMCA hostel for young homeless people in Tunbridge Wells, this is their new home. They will have some unusual housemates.

Habitat for Humanity has converted a large old Quaker meeting house: the Quakers have kept the front section, and nine young homeless people from the YMCA will move into three shared flats in the rest of the building.

The story of how these young men have ended up here - and why this project even exists - tells a bigger story about housing crisis in England, even in the middle of a jobs boom.

The story was written by FT journalists as part of the FT Seasonal Appeal to support Habitat for Humanity`s work to fight the global housing crisis.