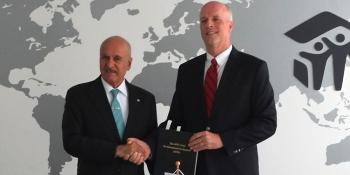 Access to adequate and affordable housing and upgrading of slum settlements is a core component of achieving inclusive, safe, resilient and sustainable cities, as envisioned in the New Urban Agenda and the Sustainable Development Goals. However, cities are still struggling in achieving this goal.

In the wettest capital in the world, Monrovia in Liberia, seventy percent of the urban population is living in informal settlements. Because of poor citywide drainage systems, the residents are continuously affected by sea erosions and river flooding. Fourteen years of civil war and the recent Ebola crisis have significantly contributed to the unhealthy and hazardous conditions in which the majority of urban residents live. To meet the growing need for housing, basic services and infrastructure, interventions are needed on community level, market level as well as improving the policies.

From urban agenda to better life

A solid plan of joint efforts is the first step towards improving lives of many. In Liberia, a five-year comprehensive urban upgrading program, Liberia Country Program, was drafted by the Cities Alliance. It is being implemented in partnership between Habitat for Humanity, the National Housing Authority, Slum Dwellers International, YMCA, UN-Habitat and Women in Informal Employment. These organizations have joined forces to support Monrovia and to upgrade the growing slum areas.

As part of the plan, the water, sanitation and hygiene initiative will target the slum community of Monrovia called Peace Island that is currently served by only one functional water point. Hence, most households have to walk long distance to the only ever-overcrowded water source. With generous funding provided by The OPEC Fund for International Development (OFID), Habitat for Humanity will be able to increase access to clean water, sanitation and waste management for 13,000 Monrovian slum-dwellers. The agreement was signed at Habitat’s regional office in Bratislava, Slovakia, by OFID Director-General Suleiman J Al-Herbish and Habitat for Humanity’s Area Vice President for Europe, Middle East and Africa, Torre Nelson.

Habitat for Humanity is proud to be part of the Liberia Country Program as it brings us closer to achieving our goal - a world where everyone has a decent place to live.