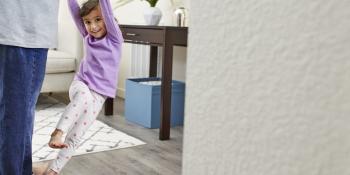 Now more than ever, home is the key to a child’s stability and security

After serving as a translator for the United States Armed Forces in Afghanistan, Emal and his family immigrated to the U.S. where he settled down with his wife, Wajma, and their three children — 8-year-old Zenab, 6-year-old Yousef and 2-year-old Zenet.

While acclimating to their new country, the family struggled to find adequate housing. They were living in a two-bedroom apartment, the children sharing one bedroom.

But it wasn’t just the cramped quarters that were creating issues for the young family. They were also struggling with alarming health issues for the children due to the apartment’s bed bugs, roaches and mice and regular, heavy fumigation that still wasn’t eradicating the problem.

All of this took a toll on the children’s health. They would get severe rashes and infections, requiring them to see a doctor and miss school. “My kids used to get sick all the time,” says Emal. “Every month I would have to take at least one child to the emergency room or urgent care clinic because of their illnesses.”

The moments that Emal cherishes most now are the ones free of worry and unexpected visits to the doctor. Since moving into their new Habitat home, he says, his kids rarely get sick. They love having their own rooms and their very own yard to play in.

“The biggest change I have seen from the new house is my kids’ health,” says Emal. “Now that my kids are healthy and we have this new home, I can focus on my next big goal for them: their education.”

More stories
Health stories
Share this page on your:

Home is the Key

Now more than ever, we can see the security that a stable home provides. Join Habitat for Humanity as we help families in need of a decent place to live through our 2021 Home is the Key campaign.

Home is the Key stories

Tour our interactive house to discover inspirational videos and stories about our 2021 Home is the Key homeowners and partners.