Hear from José and Martha.

José is the father of two young girls and a math teacher to many students at the public high school in Santa Cruz, Honduras. Both roles require that he lead an exemplary life, he says. “Part of setting an example is providing your family with a secure place to live.”

He wants to teach his daughters, 10-year-old Génesis and 6-year-old Madelyn, that a home is where families bond and grow strong together, he says, where children flourish in body and spirit.

He wants to teach his students that hard work, perseverance and responsibility is the equation for success. It is the one he followed to become a homeowner. “I have to bring this message to young people, so that tomorrow they can benefit the way that I have.”

For a long time, José and his wife, Martha, struggled to figure out the path to homeownership. In Santa Cruz, land is in high demand and short supply. “There were people with land, but it was very expensive,” José says. “With what I earn, if we could have somehow gotten the land, we wouldn’t have had enough money to build a home.”

They eventually discovered the answer to their problem. Through the advocacy efforts of Habitat Honduras and other community partners, the city of Santa Cruz adopted a housing policy aimed at helping families afford stable and decent homes. The city might acquire land, offer financial assistance, waive building permit fees, contribute construction materials and labor, put in roads or provide access to water and other services. It works with Habitat, private businesses and others partners to increase opportunities for affordable housing.

Through this collaboration, José and Martha were able to buy a Habitat home four years ago. José smiles when talking about life in the house, which is decorated with family photos, school diplomas marking the girls’ progress from grade to grade, and artwork that Martha makes from glass bottles and other materials that she recycles. The younger daughter, Madelyn, is artistic like her mom, while Génesis is good with numbers like her dad.

“I remember when my wife used to ask me, ‘When are we going to have our own home? I want to watch our daughters grow up in a home that is ours,’” José says. “I am smiling because she has her dream.”

“I am pouring the foundation for the future.”

The house has made them better parents, José says. They no longer worry about where they are going to live, he says, which gives them more time and energy to put into their children. “I might come home from work tired, but I have to play with dolls and do homework because that’s what it’s about, right? Being attentive.”

The children don’t worry any more, either, José says. “I remember after we moved in, our younger daughter casually asking, ‘Dad, we aren’t going to move away from here, right?’ I said, ‘No, this home is ours.’”

Teaching algebra and trigonometry at the high school only has reinforced for José how important a stable home is to a child’s academic and future success. Many of his students come from poor families that are constantly changing apartments to afford the rent. He has noticed that when some of those students finally move into a stable housing situation, their grades improve and they are more confident, making it more likely that they will lead lives of example.

While José is a father and a teacher, he also sees himself as a builder of sorts. “I am pouring the foundation for the future,” he says.

So many families in Honduras — and around the world — face the same challenges that José and Martha are now overcoming. Your generous support is crucial to helping them gain access to the solutions they so desperately need. Join Habitat’s Solid Ground campaign to learn more about this important work and take action today! 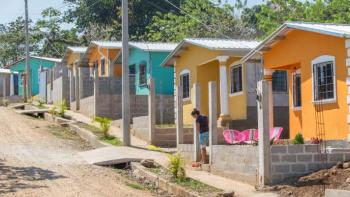 Improving access to affordable land and housing in Honduras